Nickelodeon
Register
Don't have an account?
Sign In
Advertisement
in: Character stubs, Characters, The Loud House characters,
and 13 more
English

Flip
The Loud House and The Casagrandes character

"Flippees for sale! Buy one, get a second one at the exact same price!"
Phillip "Flip" Phillipini is the greedy owner of Flip's Food & Fuel on The Loud House. He first appears in "Butterfly Effect", and since then, he has made many other appearances and cameos. He tends to take advantage of the Loud siblings and swindle them out of their money, as seen when he tricks each of them into buying what they think is Lily's missing blanket. And in "Intern for the Worse", he serves as the main antagonist, making Lincoln and Clyde compete for higher-ranking staff positions at his store and almost wrecking their friendship.

He appears to be a smug opportunist and a swindler, as seen in "Come Sale Away", where he manages to cheat each Loud sibling by giving them "Lily's blanket" in exchange for their garage sale money.

In "Out on a Limo", Lincoln states that he never gives him free smoothies, which means that Flip is stingy.

In "Intern for the Worse", he comes between Lincoln and Clyde's friendship, by making them compete for higher ranking staff positions at his store, much to his advantage.

Flip is also a very repulsive man, as seen in "Intern for the Worse" where he sells expired milk, and uses the melted cheese machine to put his dirty clothes, mostly his socks. He also falsifies lottery tickets with a black marker. The oil he uses in his store was actually hot dog grease. His disgusting behavior is shown again in "Roadie to Nowhere", where he has so much gunk on his teeth which Rita tries to remove. He also has a false tooth made out of beef jerky.

He cares a lot for his profits, but has no regard for safety or lives of his customers, because in "Washed Up" he let Louds hire a broken boat from him. He blamed them for ruining it, despite it was his own fault. In addition, in "Snow Way Out", he would have abandoned the Loud children and Hops if not given the tickets, despite them being in danger of developing hypothermia and accidentally caused them to get snowed in again.

Flip portrays as the narrator in "The Loudest Thanksgiving", where he tells viewers about how the Loud family and Casagrande family met for the first time so they can spend Thanksgiving together. In a rare show of compassion, Flip is the one who suggests that the Louds and Casagrandes alternate hosting duties for Thanksgiving dinner each year.

Flip is also an opportunist, as seen in "Last Loud on Earth" he used the storm as a distraction to steal some burgers from Burpin' Burger.

In the episode "A Flipmas Carol", it was revealed that, during his middle school years, Flip had a crush on his schoolmate Tammy Gobblesworth and wanted to dance with her at the school's Christmas dance. However, he was denied entry to the dance because he did not have a ticket. He was then tricked by Scoots into buying a false ticket, and after seeing Tammy dancing with another boy, Flip swore he would not be tricked again, which is what turned him into the swindler he is now. 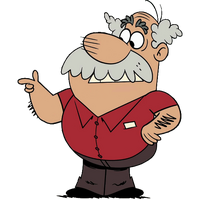 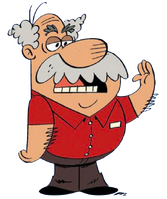