Fluffy
Rugrats And All Grown Up character

Fluffy is a supporting character in Rugrats. She is Angelica Pickles' pet cat who might be as bad as her, looks like her, and is enemies with Spike. Angelica cares for her pet cat as if Fluffy were her child. Fluffy is moody like her owner Angelica. She rarely meows or purrs unless she really wants something. However Fluffy may not be mean, she may just break/wreck things by accident, either way Angelica often blames Spike for things Fluffy did. In Babysitting Fluffy, her naughtiness was mainly in self defense and she showed an ability to be friendly. 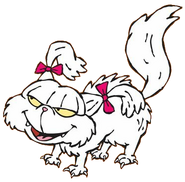