Nickelodeon
Register
Don't have an account?
Sign In
Advertisement
in: The Fairly OddParents characters, Males, Villains,
and 11 more

“What kind of madman would go mingle with that teenage gorgon?”

Foop is the Anti-Fairy counterpart of Poof in The Fairly OddParents.

He first appeared in "Anti-Poof". After Anti-Cosmo was complaining that Poof didn't have an anti-fairy, he noticed that Anti-Wanda was pregnant with an "anti-baby". Soon after Foop's birth, he decided to wanted to destroy Poof so he could be the only fairy baby in existence. He then proceeded to drain both Fairy World and Anti-Fairy World of their power in order to send Earth into chaos. However, having not received a nap that day, Poof and the other fairies and anti-fairies managed to get Foop to fall asleep.

Since every Fairy has an Anti-Fairy counterpart, Poof's Anti-Fairy counterpart was born to Anti-Wanda and Anti-Cosmo, with the mother giving birth since in Anti-Fairy Pregnancy females do so, as opposed to males giving birth in Fairy Pregnancy. Because Poof is so nice and attracts so much positive attention, Foop is evil and is extremely jealous of his counterpart. Foop wants nothing but to destroy Poof, and he cares not for anyone who gets in his way including his fellow Anti-fairies. Unlike Poof, who causes bad things to happen when he cries, Foop causes good things to happen when he cries. Foop is the only Anti-fairy known to not have his name starting with the prefix "Anti-" (possibly due to no Anti-fairies being born in milleniums as the Fairies decided not to have babies after Cosmo). Foop is also a lot like his father, Anti-Cosmo. He also suffers from a split personality; that of a kind and sensitive side opposed to his evil, maniacal self, to which he argues with on a regular basis. He would even kill Poof just to get him attention.

Foop resembles Poof, but he is shaped like a cube rather than a sphere. He also was born with a black mustache and goatee on his face (sometimes human boy babies are born with them sometimes), the kind typically seen on stereotypical or drawn on pictures as vandalism. It is interesting to note a goatee on a doppelganger insinuates its the evil one. His shirt is slightly darker blue than his skin, and they have a skull symbol on them. Foop has bat wings and a black crown like all Anti-fairies. His wand is a baby bottle with blue bat wings on the side, as opposed to Poof's baby rattle. He also speaks with a stereotypical British gentleman's accent like his father Anti-Cosmo, who apparently grew to dislike him soon after his birth. Foop's tears are also made of acid. He inherited the same set of fangs and pointed ears from his father, and has the same eyebrows and eyelashes his mother has.He is almost a complete reflection of his father when it comes to personality.

As the series went on, Foop would start making mistakes that his mother would make. In "Timmy's Secret Wish!", he didn't realize that he would disappear with Poof due to his uncontrolled arrogance. And in "When L.O.S.E.R.S. Attack", he didn't notice that there was a spider on his tongue. 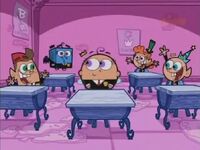 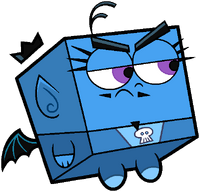 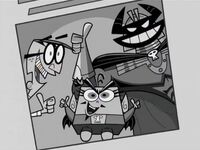