Nickelodeon
Register
Don't have an account?
Sign In
Advertisement
in: Males, The Fairly OddParents characters, Humans,
and 12 more
English

Francis is one of the recurring antagonists in The Fairly OddParents. He is a bully at Dimmsdale Elementary School who terrorizes Timmy and his friends. He is extremely stupid and is very unfriendly. He bullies Timmy and his friends for fun, ranging from giving them wedgies to outright beating them up with his fists. Thanks to Cosmo and Wanda, though, Francis has received his just desserts many times over. Francis is also feared by many other unnamed kids at Timmy's school who considered Timmy their hero when he stood up to Francis using Yoo-Doo dolls. He even picks on adults, as shown on the beach where he switches Mr. and Mrs. Turner's tanning oil with cooking oil.

He is bulky, has absolutely no tan whatsoever, and has very crooked, discolored teeth. He wears a black sleeveless vest over a gray shirt with a lightning bolt on it, blue jeans with a wallet chain along the side, spiked wristbands, and black nail polish. He is very scary. In an alternate timeline without Timmy, he became a tanned, well-groomed star football player who defends weaker kids rather than hurt them (Instead he does his bullying on the football field). However, it should be pointed out that this assertion is, at best, questionable as the alternate timeline shown was a test given to Timmy by Jorgen. He regularly breaks about just weaponry laws as displayed on the picture to the right. He is cruel and especially hates Timmy. He is the 4th bad guy in the series. He is a main antagonist in several episodes.

Outside of school, not much is known about Francis other than that he likes to skateboard, although he attempted to do a jump so high that it took him the entire episode to fall back down to Earth in the episode Hex Games. He is known to shoplift, such as when he stole tons of objects from Wall 2 Wall Mart and blamed it on Timmy. In a comic book story called Friendly Francis, Timmy temporarily befriends Francis, although his friendship usually results in Timmy getting put in danger, so Timmy eventually cuts him off and Francis goes back to bullying him. In Transparents!, it is revealed that he has a vicious bulldog that eats first-graders. 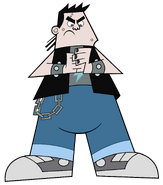