Fredward "Freddie" Benson is Carly Shay's best friend and neighbor in the TV series iCarly. He is the tech producer and a main character of iCarly, and the oldest member of the iCarly gang. He lives across the hall from Carly in Bushwell Plaza, in apartment 8D. Freddie was portrayed by Nathan Kress. He has a crush on Carly and has asked her out many times. He has more of a love/hate relationship with Sam but in a few episodes they kissed.

In season 1, Freddie is shorter and has a slightly chubby build. He regularly wears striped shirts and cargo pants. As the show goes on, Freddie matures physically and his wardrobe changes as well.

In seasons 4-6, Freddie is shown to be much taller and more muscular. He typically wears jeans and button up shirts during these seasons.

Freddie is very intelligent and is shown to be a bit of a "geeky" person who is able to get excited over anything to do with technology. He is a member of the AV club at Ridgeway High, and the technical producer for the hit webshow iCarly. He is a huge fan of the movie "Galaxy Wars", and it has been mentioned that he has attended a Galaxy Wars convention at some point. He owns a lot of memorabilia related to the film series, which includes a laser gun and a stun blazer. He is a very gifted fencer, a skill which he inherited from his ancestors (known as the Fencin' Bensons). He is able to speak Spanish, and is known to come out with random outbursts of the language in different episodes. Despite being a generally kind person, Freddie is sometimes shown to have a somewhat mean/violent streak. For example, in the episode iSell Penny Tees he is shown slowly picking up a knife after Sam bothers him, though he stops himself and sets it back on the counter.

Freddie lives with his overly-protective mother Marissa Benson, and frequently gets embarrassed by her actions. In "iMove Out", Freddie grows tired of his mother's behaviour and promptly moves out of their apartment, though he returns home at the end of the episode. He is also aware that his mother put a chip in his head when he was a baby, so she could locate him wherever he was.

In an iCarly.com extra, Freddie admits T-Bo that he has stage-fright. This was further confirmed in iCook, when he nervously (and rather amusingly) exclaims that's he's "Freddie Benson" after realizing he was on television.

Sam and Freddie have an ongoing love/hate relationship throughout the course of the series. Most of the time, they are shown to get along rather well, while at other times, they have been known to resort to physical violence and name-calling. In the episode iKiss, they share their first kiss together to "get it out with". Freddie has shown on numerous occasions that he cares deeply about Sam, and thinks of her as a really good friend of his. In iReunite With Missy, he gives away a six-month cruise, which he desperately wanted, just to get rid of Sam's enemy Missy Robinson and make her happy again.

At the start of season 4, it was obvious that the two had grown closer, and started spending more time together without Carly (who, originally, was the only reason the two became friends). In the season 4 special iOMG, it is revealed that Sam is in love with Freddie, after she kisses him unexpectedly at Ridgeway's annual lock-in (Carly and Freddie both thought that it was iCarly's new intern Brad she was in love with). In the season 5 premiere "iLost My Mind" it was shown that Freddie returns these feelings, after he kisses her live on an iCarly webcast.

In "iLost My Mind", the two began a romantic relationship. Though they seemed to like each other, they got into many arguments. They often brought Carly along to fix things, much to her chagrin. They eventually broke up in "iLove You" after realizing that they barely had much in common, though they still kissed one final time in the elevator.

Freddie's crush on Carly was established in the first episode, but she remained adamant that she was only interested in friendship. They have known each other since sixth grade, and are shown to be extremely good friends, standing up for each other on numerous occasions.

In "iSaved Your Life", Freddie pushes Carly out of the way of an oncoming taco truck, getting himself hurt in the process. Dazzled by his act of bravery, Carly starts to show a romantic interest in him and the two date for a short while. However, they break up at the end of the episode after Freddie comes to the conclusion that the only reason Carly wanted to be with him was because he did something heroic. They agreed to try the relationship thing again after the "hero phase" was over, but their relationship has not been brought up on the show since, implying that either Freddie was correct and Carly was only infatuated with his good deed; or that both were simply scared that the other may no longer feel the same way anymore.

Since Freddie has started to date Sam, and seems rather happy with her, it is highly likely that his crush on Carly faded sometime ago. Although after he and Sam broke up, Freddie's crush seemed to have rekindled.

In "iGoodbye", Carly and Freddie finally cemented their love when she kissed him before leaving for Italy with her dad. Though this didn't mean that they would be in a long-distant relationship, it did show that she reciprocated his feelings. Freddie seemed happy at this, and even did a "fist pump" in the air.

Spencer seems to be something like a big brother to Freddie. Freddie usually asks him for advice (especially about girls) and enjoys hanging out with him when he needs "guy time" away from Carly and Sam.

Before Gibby became a main character, Freddie barely interacted with him except for working on iCarly. The most notable situation between them was in "iEnrage Gibby", when Gibby got mad at Freddie when he thought he tried to kiss his girlfriend Tasha. They reconciled and declared themselves "bros" after Gibby learned it was just a misunderstanding. It is seen in many iCarly videos and episode that they have started to hang out more with one another. 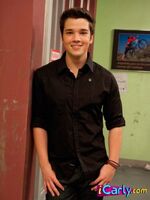