Friday Night Nicktoons was a programming block that aired on Nickelodeon from July 12, 2002 to December 17, 2004. Its original time slot was 8-10 pm, before expanding from 7-10 pm towards the end of the block's run. The block was made to compete with Cartoon Network's Cartoon Cartoon Fridays (later Cartoon Network's Fridays) block.

Friday Night Nicktoons premiered on July 12, 2002 at 8/7c. The block took place in a CGI-animated building loosely based on the Nickelodeon Animation Studio in Hollywood. The branding featured characters from different series interacting with each other in the studio. Inside the building included sets for different Nicktoons, along with a giant sentient binocular, the block's logo, and mechanical arms.

Characters from most Nicktoons up to the block's creation could be spotted in the intro sequence and the bumpers, but only the following shows actually aired on the block during this era:

On March 5, 2004, Friday Night Nicktoons was temporarily replaced by Prime Time Nicktoons. Unlike FNN, the block used generic "We'll be right back" and "Now back to the show" bumpers. 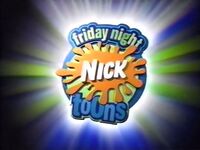 The first intro sequence of Friday Night Nicktoons, used from July 12, 2002 to February 27, 2004.
Community content is available under CC-BY-SA unless otherwise noted.
Advertisement