Gary Wilson, Jr. is one of the main characters in SpongeBob SquarePants. He is SpongeBob's pet snail. Gary is known to love books and other educational stuff and is more mature than most other characters. He also hates taking baths as shown in "Gary Takes a Bath".

As revealed in "Rule of Dumb", Gary is the rightful king of Bikini Bottom and is related to Patrick. Gary is shown to be very bored and massively cheeky, although, being a pet, he lacks the communication skills to convey this. In Gary's dream in "Sleepy Time", he is able to talk, has a humanoid body, and resides in a massive library.

Gary has a blue body and green-yellow slime and eye stalks, big green eyes, red irises and black pupils, and an orange/pink-peach shell with purple spots and red swirl and a large tumor in his lower stomach area. He has what looks like to be a room under his shell, which he has said to have had a New Year's Eve party. The room consists of a chair, a fireplace and a book shelf. Once we also saw Gary without a shell revealing his slimy inside.

Information regarding Gary's early life is limited to that he lived with SpongeBob while the latter lived in his parents' house, which is implied in "Home Sweet Pineapple." Also, young SpongeBob and young Gary are featured in SpongeBob's scrapbook in the episode "Have You Seen This Snail?"

In the episode "Rule of Dumb", it is revealed that Gary is the rightful king of Bikini Bottom and is also Patrick's cousin, although interestingly snails and starfish are very far off from each other on the evolutionary line.

Since SpongeBob was a little boy, he has taken the ownership of Gary. Gary is an intelligent, fully domesticated snail. His intelligence shines through in the fact that he has more intelligent solutions to SpongeBob's dilemmas than SpongeBob himself. Gary tends to disagree with some of SpongeBob's ideas, and usually makes an effort to warn him. Gary is generally shown to find SpongeBob oblivious, ignorant and annoying, yet still willingly tolerates him (probably due to the fact that SpongeBob takes care of him), and in many episodes, it is shown that he cares a lot about SpongeBob.

In "Have You Seen This Snail?", Gary runs away from SpongeBob when he fails to feed him because SpongeBob was addicted to the official Mermaid Man and Barnacle Boy Paddle Ball Set. Gary wanders aimlessly in search of a home, venturing into the dangerous inner city, until he is found by an elderly woman who pampers and overfeeds him, and renames him Ms. Tuffsy. However, he eventually discovers her horrible secret: she is a snail killer (he is told this by another, half-dead snail in a parody of Hansel and Gretel, along with possibly one hundred empty snail shells he finds in a closet)! Gary narrowly escapes from her, and upon learning of SpongeBob's desperate efforts to find him, realizes that SpongeBob does indeed love him and has learned the error of his ways, and goes back to him.

Gary speaks mostly with cat-like meowing (except on one occasion, where he roared instead of meowing), although SpongeBob is shown to understand what Gary is saying, which is shown to be a very rare trait in the show, in comparison to the other main characters. Gary has only been heard speaking English three times: Once in "Sleepy Time" in his own dream, once in "The Secret Box" where he says "Err...No." The third time was in The SpongeBob SquarePants Movie, when Gary is under the control of Plankton's mind-controlling bucket helmets, he chants "Meow Plankton."

In "Opposite Day", according to SpongeBob, Gary had a low holiday spirit, so he barked instead of meowed. He has also barked in few other episodes. 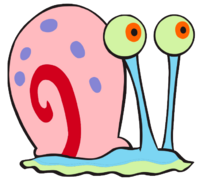 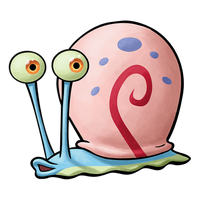 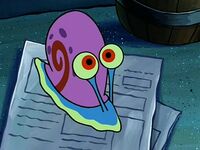 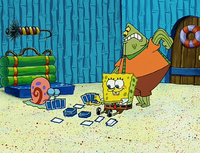 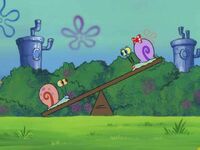 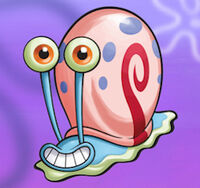 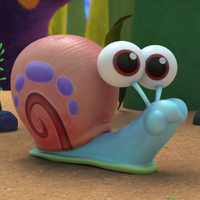 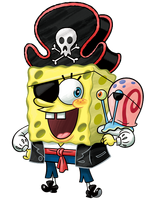 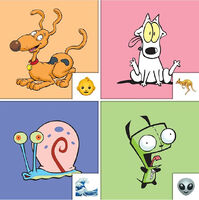 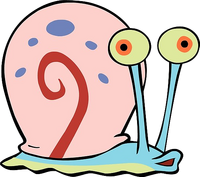 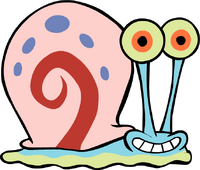 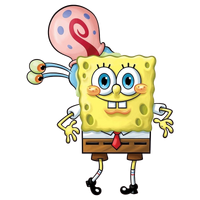 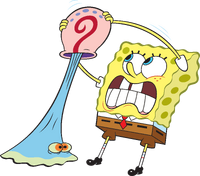 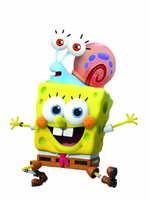 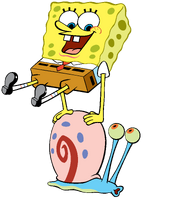 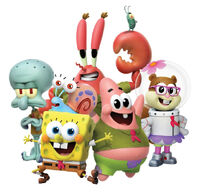