The Little House on the Hill (confirmed in "Stamps")

George Pig is one of the main characters in Peppa Pig. He is Peppa's little brother, and the son of Mummy Pig and Daddy Pig. He likes dinosaurs, space rockets, and playing with his best friend Richard Rabbit. Currently, he is voiced by Alice May and Vincent van Hulzen.

George is light pink with cheeks slightly darker than his skin. His mouth and nostrils are a dark grayish pink and his pupils are black. He has a pig snout, ears on his head, a curly tail, and stick-shaped limbs. He wears a blue shirt and black shoes. When necessary, he wears red boots in place of his shoes. He is a little shorter than Peppa and most of the other kids.

George is portrayed as a young and energetic little piggy who likes playing with his friends and family, though he can get upset very quickly when things don't go his way. Over the course of the series, George learns to be more patient and calm, but like any other kid his age, he still cries and throws fits occasionally. He is also shown to have many skills and talents, such as surfing, ice skating, and blowing a huge horn that no one else was strong enough to blow, all of which he was able to do perfectly on the first go. 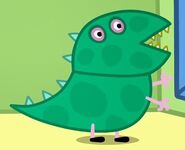 George imagining himself as a real dinosaur

George first receiving Mr. Dinosaur when he was very young (seen during a flashback in "The Olden Days") 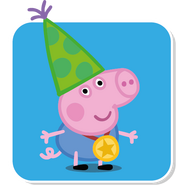 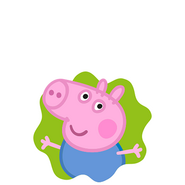 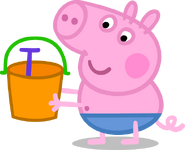 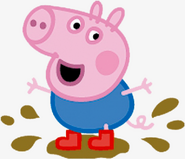 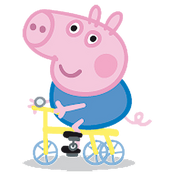 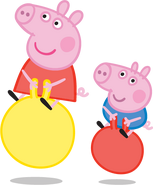