Nickelodeon
Register
Don't have an account?
Sign In
Advertisement
in: Characters, Females, The Fairly OddParents characters,
and 6 more

Ms. Waxelplax is the Dimmsdale Elementary School's president on The Fairly OddParents. She first appeared in "Transparents!", where she and another teacher were seen laughing behind Mr. Crocker's back and to his face. She was easily annoyed by Mr. Crocker's attempts to catch a fairy, especially when one of his traps catches her instead.

She is the principal at Dimmsdale Elementary School and was once in love with Denzel Crocker, but broke up with him when she realized about his obsession with fairies. She is mildly obese, loves any kind of food, but mentions she is "frosting intolerant".

Geraldine is depicted as a heavy set, large bottom/breasts woman who seems to love jelly donuts, as revealed in "What's the Difference?", often trying to hit using a flail anyone who gets too close to the donut. She is usually in her school outfit of a blue businesswoman's suit which combines the jacket and about knee-length skirt with a light blue blouse like shirt underneath. Based on the Episode "The Secret Origin of Denzel Crocker", her age is an estimated to be around late 30's to early 40's assuming she is a close in age to Mr. Crocker. She speaks with a strong Midwestern accent. 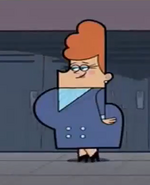 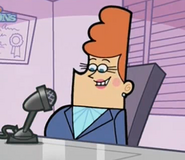