A slightly obese white cat, has an orange spot around his left eye, has a stumpy orange tail, and green eyes with black pupils.

"In the name of the Highland Quid Clan!"
"Feel my sting!"
"Great gopher!"
"Cheer!"
"Aye!"
"Pop a Wheelie!"
Gordon Quid is the main protagonist of Catscratch, he is a manx.

All honor and heart, righter of wrong, do-er of good, Gordon is a sloppy bachelor who harbors a secret crush on Human Kimberly.

He is loyal to a fault, full of pride, and a very messy eater. Judging from his short tail, he is a Manx.

Gordon also has a mission set before him: Get Mr. Blik to do the right thing.

Gordon is mostly a white color. He has an orange spot around his left eye. He has a stumpy orange tail and a pair of green eyes with black pupils. 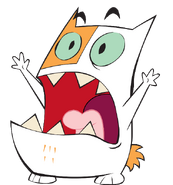 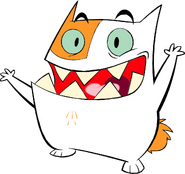