Hiram William Wolfe is Heffer's adoptive-grandfather from George's side of the family. While he is undoubtedly very old, his exact age is never revealed, he was said in his prime some time in the 1940s or 1950s, according to the second-season episode Cruisin. This would put him somewhere between 80 and 90 years old. His eyesight, co-ordination, and bladder control are all suffering, and he cannot chew solid food. He relies on his walking stick or wheelchair to get around. He has a hatred of wallabies and acts hostile towards Rocko, but due to his incredibly poor eyesight he mistakenly believes that Rocko is a beaver (despite that Heffer lied to him that Rocko is a coyote). He was also in love with Winfred Wolfe when he attended Ozark Tech. In Static Cling, he returns as a ghost with no legs. He was voiced by Charlie Adler. 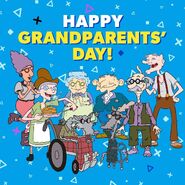 Add a photo to this gallery
Retrieved from "https://nickelodeon.fandom.com/wiki/Grandpa_Wolfe?oldid=247308"
Community content is available under CC-BY-SA unless otherwise noted.