Kittens; sunlight; people who smile too much; liars; Tristan on Vampires of Melancholia

"Deep stuff."
Haiku is a recurring character on The Loud House. She is a friend of Lucy's and her co-president of the Morticians Club at Royal Woods Elementary, and also a student in the school's writing club. Haiku is a lot like Lucy, speaking in a calm, emotionless voice, and rarely smiling, and also aspires to be a poet. According to Lucy, she only turned goth about a year earlier.

Haiku is introduced in "Dance, Dance Resolution" as the girl Lucy sets Lincoln up with for the school's Sadie Hawkins dance. However, when Ronnie Anne unexpectedly shows up at the dance, Lincoln gets his friends to cover for him with his four dates, sending Clyde to cover for him with Haiku. Haiku and Clyde end up bonding over the fact that the both of them have unrequited crushes on older people (in Haiku's case, a presumably fictional vampire).

Being a friend of Lucy's, Haiku typically appears primarily in episodes where Lucy is the main character, often alongside their fellow Morticians' Club members. Her most prominent role was in the Season 4 episode "A Grave Mistake", in which she is picked to replace the Morticians Club's previous leader, Bertrand (who is moving away due to his father getting a job on the S.S. Funtime Party Cruise). This does not sit well with Lucy, who believes she would make a better president, and the two compete for the role, with Lucy ultimately winning when she makes Lincoln join the club simply to vote for her. This puts a strain on their friendship, to the point that the other Morticians Club members quit out of spite, leaving Lucy to plan a funeral for the school's recently-deceased mascot, Ricky the Rooster, on her own. When the funeral turns out to be a disaster, Lucy apologizes to Haiku and her friends for her behavior, and the group gets back together to give Ricky a much better funeral. Afterward, Lucy offers to give the club presidency to Haiku, but Haiku suggests that she and Lucy share the role. 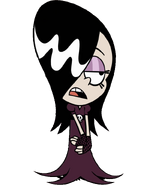