Nickelodeon
Register
Don't have an account?
Sign In
Advertisement
in: Character stubs, Rugrats characters, All Grown Up! characters,
and 6 more

Harold Frumpkin
Rugrats and All Grown Up! character

Harold Wayne Frumpkin is one of Angelica and Susie's preschool classmates, voiced by Pat Musick. Introduced in the eighth season of Rugrats in the episode "Pre-School Daze", he made a few subsequent appearances in the show's last two seasons as well as in Tales from the Crib: Three Jacks and a Beanstalk and all four episodes of Rugrats Pre-School Daze, but had a more prominent role in the spin-off show All Grown Up!

Harold has known Angelica and Susie since pre-school, and reminds them of that fact every chance he gets. He is good natured and means well, but Harold can tend to be a bit annoying, to say the least. His social skills have a lot to be desired, and he often matches Phil in terms of grossness, although most of the time he is oblivious as to how gross he is. Despite her constant put-downs, Harold dotes on Angelica, and he may be the only guy out there who worships her the way she wishes everyone would. 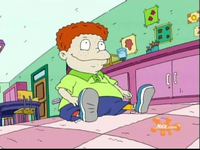