"Ah, the sea. So fascinating, so wonderful. Here, we see Bikini Bottom, teeming with life. Home to one of my favorite creatures, SpongeBob SquarePants. Yes, of course he lives in a pineapple, you silly."
―The French Narrator, saying the first line of the series.

"Help Wanted" is the pilot episode of SpongeBob SquarePants, and it is also the first segment of the very first episode.

A narrator with a French accent introduces us to the undersea town of Bikini Bottom and one of its residents, SpongeBob SquarePants, an anthropomorphic sea sponge who, as stated in the theme song, lives in a pineapple. SpongeBob wakes up and tells his pet snail, Gary, that he has to be in good shape because today is an important day for him - he's going to apply for the job of fry cook at the Krusty Krab. As he approaches the restaurant, SpongeBob briefly loses his confidence, but his best friend, Patrick Star, cheers him on.

Squidward Tentacles, the Krusty Krab's head cashier who happens to be SpongeBob and Patrick's neighbor, is cleaning the window when he sees that SpongeBob wants the job. Frightened by this idea, he tells the restaurant's owner, Eugene H. Krabs, that SpongeBob is not qualified for the job. When SpongeBob walks in to apply for the job, Mr. Krabs tells SpongeBob that he can join the "Krusty Krew" if he passes a "test", in which he has to obtain a "Hydrodynamic Spatula with Port and Starboard Attachments and a Turbo-Drive" (essentially sending SpongeBob on a form of snipe hunt), believing that there is no such thing and that SpongeBob will never come back trying to find it.

As soon as SpongeBob leaves, five buses drop off a large crowd of hungry Anchovies. They barge into the Krusty Krab, demanding Krabby Patties. Attempting to keep things in order, Squidward complains about their behavior, then requests that there be a single-file line in front of the cash register. But the anchovies angrily protest, forming a riot of angry anchovies set to resemble a stormy sea. This forces Squidward and Mr. Krabs to climb up the "mast". Just in the nick of time, though, SpongeBob returns with his "hydrodynamic spatula with port and starboard attachments and a turbo-drive" (according to SpongeBob, the Barg'n Mart only had one in stock), which surprises Mr. Krabs. SpongeBob flies into the kitchen and as fast as he can, satisfies the needs of the angry anchovies with huge streams of Krabby Patties.

Delighted at SpongeBob's performance, Mr. Krabs hires him, much to Squidward's disdain. Squidward tries to protest this, but Mr. Krabs does not listen to him because he wants to go and count the huge money he just made in his office. At the end, Patrick walks in and asks for a Krabby Patty. SpongeBob races into the kitchen and makes a huge stream of Krabby Patties which hit Patrick and send him flying out of the restaurant.

While pitching the cartoon to Nickelodeon executives, Hillenburg donned a Hawaiian shirt, brought along an "underwater terrarium with models of the characters", and Hawaiian music to set the theme. The setup was described by Nick executive Eric Coleman as "pretty amazing". When given money and two weeks to write the pilot episode ("Help Wanted"), Derek Drymon, Stephen Hillenberg, and Nick Jennings returned with, described by Nickelodeon official Albie Hecht, "a performance [I] wish [I] had on tape". Although described as stressful by executive producer Derek Drymon, the pitch went "very well"; Kevin Kay and Hecht had to step outside because they were "exhausted from laughing", making the cartoonists worried.

The original version of this pilot had its title card and opening credits placed between the first two scenes, rather than at the very beginning of the episode like on the series proper. The original version can only be found on the Best of Nicktoons 1998 VHS tape, which was only given out to Nickelodeon Animation Studio employees.

SpongeBob SquarePants aired its first episode, "Help Wanted / Reef Blower / Tea at the Treedome", on May 1, 1999, following the 1999 Kids' Choice Awards. The series later made its "official" debut on July 17, 1999 with the second episode, "Bubblestand / Ripped Pants".

This pilot was made and recorded in 1997, so it has many differences to the rest of the series. However, the original version of the episode had many other minor differences that were corrected later. For example, this is the only episode where SpongeBob's bed is on the right (excluding two later first-season episodes, "Pickles" and "Employee of the Month"), and his blanket is solid blue, as opposed to purple with flowers. Differences in voices are another example. SpongeBob's voice is slightly lower and Patrick's is deeper. Designs and colors are also different. For example, SpongeBob has fewer holes than in newer episodes, Mr. Krabs' eyelids are bright pink opposed to red, Patrick's pants are in a slightly different color, Squidward's complexion is paler, his laugh is different, the comedic "splat" sound is different, and his nose does not puff in and out when he laughs. Gary's eye pupils are red dots and his irises are smaller, he lacks eyelashes, and he has a lower tone of voice in the "meow" (although Tom Kenny claims to use a new "meow" for each episode). Squidward also appears to have rows of bamboo poles behind his house. Differences in SpongeBob's house are also present in this episode, but not in others, such as there is only one window in the front. Also, SpongeBob and Patrick are a little bit fatter. Also, SpongeBob's alarm clock has a different ship horn sound than his alarm clock in later episodes. The changes were made when the series officially aired. 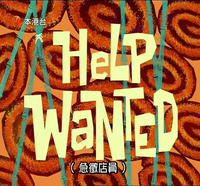 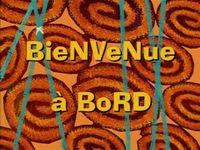