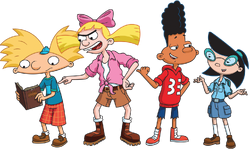 Hey Arnold!: The Jungle Movie is a animated television film based on Hey Arnold!, intended to serve as the show's series finale. The movie's storyline, taking place about two years after the events of "The Journal", was written to resolve the series' unanswered questions, such as the whereabouts of Arnold's parents. Originally intended as a theatrical film, it was initially shelved in 2003 following the box-office failure of Hey Arnold!: The Movie (2002), before eventually resuming production in 2015. It is the second revival movie for a Nickelodeon show (following the Legends of the Hidden Temple movie) and the first one based on a Nicktoon.

Arnold is now in the fifth grade, after finding the map at the end of "The Journal", and he has been having recurring dreams about finding his parents. On the last day of school, Mr. Simmons announces to the class that they have been nominated for a contest to make a humanitarian video during the summer to win a trip to San Lorenzo, where Arnold knows his parents were all those years. Arnold and Gerald record a video themselves making a home out of junk for Monkeyman, but that backfires when the house falls apart.

Arnold leaves, heartbroken, and suddenly bumps into Helga, telling her that he was really hoping that, if he could get to San Lorenzo, he'd be able to find his parents. After he leaves, Helga decides that if she can help Arnold find his parents, maybe he'll be so grateful to her that he may actually return the love she has for him. With the help of the rest of the gang, and using footage from security cameras showing Arnold's good deeds over the years (all referencing past episodes of the show), she puts together a video showing what a humanitarian Arnold is. Later, everyone in town surprises Arnold with the video, and Mr. Simmons tells him that this video won the contest for them, and thus they're going to San Lorenzo. Helga's sister, Olga, also comes with them as a chaperone (much to Helga's dismay), bringing along some beepers that Big Bob wants her to sell to the locals (his beeper shop is shown to have fallen on hard times due to the rise of cell phones). Also, Grandpa Phil stows Arnold's pet pig, Abner, in one of his bags so he could come along on the trip.

When everyone arrives in San Lorenzo, they are greeted by a man claiming to be Eduardo, Arnold's parents' old friend. On board his ship, Eduardo privately warns Arnold of the dangers the jungle has to offer and gives him an amulet said to lead him to the "Green-Eyed People", the residents of the lost city of San Lorenzo.

That night, Helga attempts to confess her feelings to Arnold, but the moment is ruined when Arnold sees another ship coming after them. Helga furiously gives up on her crush on Arnold, tears the picture of him from her locket, and throws her locket into the river. The ship is then suddenly attacked by a group of what appear to be pirates working for the evil Lasombra, a ruthless mercenary whom Arnold's parents had foiled years ago. After Eduardo drives the ship through the rapids, he tells the rest of the class that the pirates who just attacked them were after Arnold. Upon learning the secret that Arnold has kept from them, Arnold's friends (even Gerald) shun him.

When the whole group enters a base camp, "Eduardo" reveals that he is actually Lasombra, and that he set up the video contest to lure Arnold into his trap. He and his men imprison everyone, and plan on using Arnold to find the lost city and its treasure, called the Corazón. Although the kids are still mad at Arnold for this situation, Helga listens in on Arnold giving up on his mission and vows to help him escape and find his parents. Brainy, knowing how much Helga truly loves Arnold, returns her locket to her, having retrieved it after she threw it in the river and stitched her photo of Arnold back together. With the rest of the gang's help, Helga and Gerald escape and free Arnold. They then use Arnold's father's old journal to make their way to the lost city, unaware that the amulet Arnold received earlier is actually a tracking device that Lasombra is using.

In the meantime, Phoebe constructs a long-way homing beacon, using the beepers that Olga brought and Rhonda's cell phone, to broadcast an SOS message to Helga's parents. Meanwhile, Abner (who had escaped during the earlier battle on the boat) makes it back to Hillwood City to alert Arnold's grandparents about what happened. Phil and Gertie go to the airport and, after meeting up with Bob and Miriam, fly a rental plane to San Lorenzo, where they soon help the other kids defeat Lasombra's gang.

Meanwhile, Arnold, Helga, and Gerald manage to evade the lost city's traps, unaware that Lasombra is right behind them, sacrificing most of his men to the traps in the process. Eventually, the trio is found by the young Green-Eyed People, who recognize Arnold as their "chosen one". Arnold and his companions are brought to the Green-Eyed People's city, where they are greeted by the children who live there. By way of the paintings on the city walls, the trio learn that the Green-Eyed children's parents all fell victim to the sleeping sickness that Arnold's parents had come to cure. The Green-Eyed children then present the statue containing the Corazón, which could cure the sleep sickness. Just then, however, Lasombra shows up and takes Arnold hostage while stealing the Corazón.

Gerald and Helga chase him across a rope bridge, but Lasombra cuts the bridge and threatens to kill them unless Arnold opens the statue. Arnold reluctantly does so, using the amulet to open it. He succeeds and opens the statue to reveal the Corazón, a heart literally made of gold. But when Lasombra tries to take the heart, the statue shoots him in the forehead with a poisoned dart, causing him to fall off the cliff. Arnold then tries to pull Gerald and Helga up, but almost goes over the cliff himself. Fortunately, the three of them are then saved by the real Eduardo. Edurardo explains to them that he had been captured by Lasombra's men prior to the class's arrival, and he had managed to escape, but when he tried to find Arnold and his friends, they'd already been deceived by Lasombra, and he tried to catch up to them on another boat, which the kids thought was the pirate attack. Suddenly, the now-poisoned Lasombra climbs back up the cliff and makes one last attempt to kill Eduardo and the kids, during which he accidentally kicks the Corazón off the cliff, before succumbing to the poison dart and falling to his death.

The group heads back to the lost city, where the princess of the Green-Eyed people takes Arnold to finally see his parents, who are revealed to have also been contaminated with the sleep sickness. Arnold learns that he was supposed to place the golden heart in a machine that would've spread the cure all over the infected population, but due to the Corazón being knocked over the cliff, he may be unable to do that. Fortunately, Helga gives her locket to Arnold to use as a substitute. It works, and the temple releases the cure and the infected green-eyed people are revived, reuniting Arnold with his parents and the city's children with theirs. Later, Arnold professes his gratitude for Helga, thus showing that he has finally come to reciprocate her love, and the two share their first romantic kiss together.

Three months later, Arnold wakes up on the first day of school, with his parents now living with him and his grandparents at the boarding house. The film ends on Arnold waving goodbye to his parents as he, his new secret girlfriend, and his best friend head off to their first day of sixth grade as the doors close to the school.

The film's development dates back as early as 1998, after Hey Arnold! was renewed for a fourth season. Creator Craig Bartlett was offered to develop two feature films based on the series, one that would premiere as a direct-to-video or made-for-TV film, the other being a theatrical film. He decided that the made-for-TV film would be made as a 3-part episode titled Arnold Saves the Neighborhood, while the theatrical film, which became known as The Jungle Movie, would serve as a follow-up to the episode "Parents Day". However, Nickelodeon decided to release Arnold Saves the Neighborhood in theaters as Hey Arnold!: The Movie, and also asked Bartlett to produce a special 1-hour episode of the show, titled "The Journal" to serve as a lead-in to The Jungle Movie. However, Hey Arnold!: The Movie turned out to be a box-office failure, and although Nickelodeon still wanted to make The Jungle Movie, Bartlett left the network to work on a pilot/TV movie for Cartoon Network, called Party Wagon, resulting in the show being cancelled.

In subsequent years, Bartlett shared certain details about The Jungle Movie to the fans. In 2009, online petitions were made to have The Jungle Movie given the green light, and the series soon experienced a resurgence in popularity when reruns of it began airing on The '90s Are All That on TeenNick. Bartlett returned to Nickelodeon in 2012, and revealed two years later that he and the network executives were discussing the possibility of rebooting the series. Justin Shenkarow, the voice of Harold, also revealed that Bartlett and Nickelodeon were in talks for greenlighting The Jungle Movie.

Finally on November 23, 2015, Nickelodeon announced that a Hey Arnold! TV movie, intended to resolve the cliffhanger from "The Journal", was in the works, implying that the Jungle Movie was back in production.[1] Craig Bartlett later confirmed on March 2, 2016, that the Jungle Movie had indeed been greenlit as a two-part, two-hour movie, set to premiere in November 2017. It was later confirmed that nineteen of the show's original voice actors would be reprising their roles. Arnold and Gerald's original voices, Lane Toran and Jamil Smith, have also been confirmed to return, voicing different characters, while Arnold and Gerald are now voiced by Mason Vale Cotton and Benjamin Flores Jr., respectively, and Alfred Molina would be voicing the villainous Lasombra.[2]

Nickelodeon unveiled a first look at the film as part of the "Happy Happy! Joy Joy!: 25 Years of Nickelodeon Original Animation" panel at the 2016 San Diego Comic-Con. The following year's convention featured a four-minute preview clip.

In an interview with Craig Bartlett, he stated that if the movie does well, it could potentially serve as the pilot for a continuation of the series. He also stated that even if it did not revive the series, his plan would be to continue Hey Arnold! in a series of graphic novels, much like Avatar: The Last Airbender and The Legend of Korra. 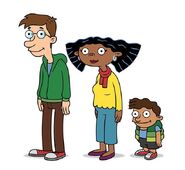 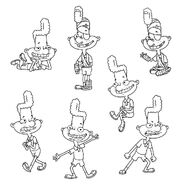 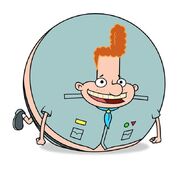 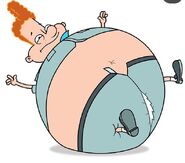 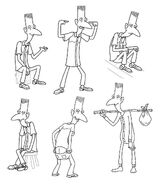 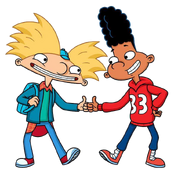 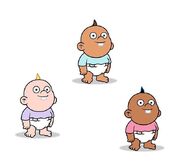 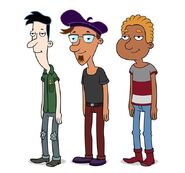 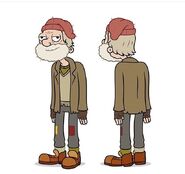 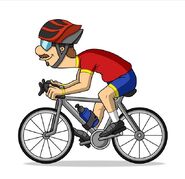 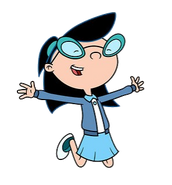 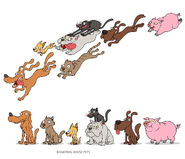 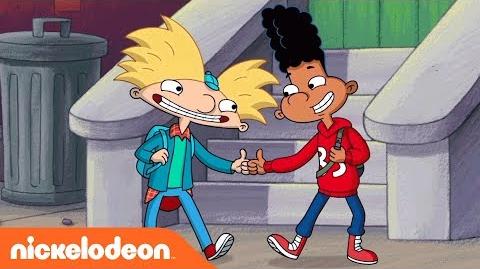 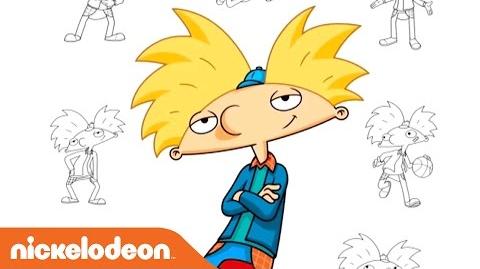 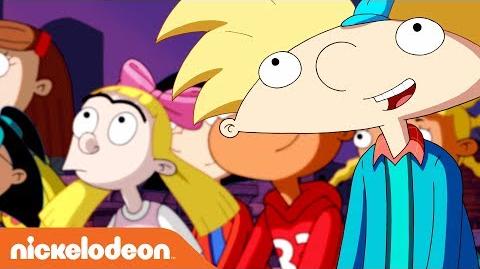 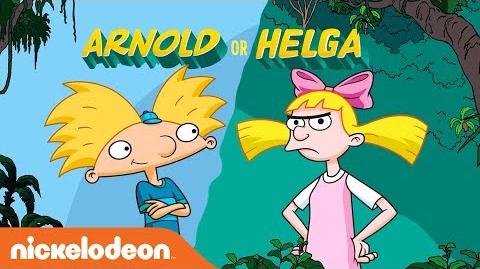 'Hey Arnold! The Jungle Movie' Are You an Arnold 🏈 or a Helga? 🎀 Nick 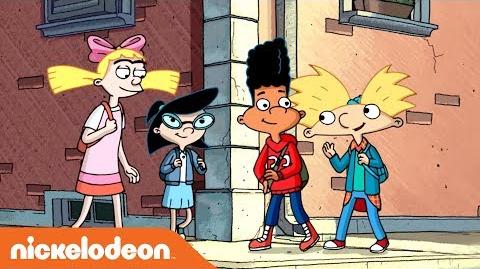 Which Member of Arnold's Crew Are You⁉️ Hey Arnold! The Jungle Movie Nick 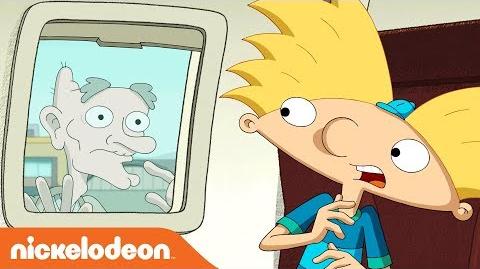 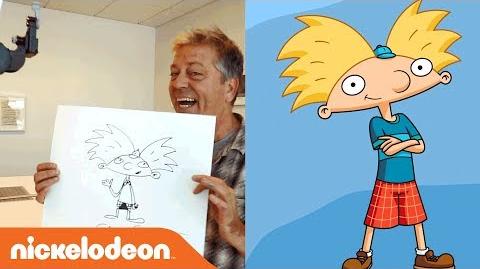