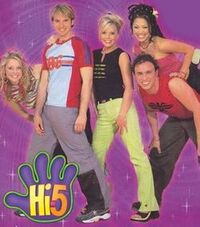 Hi-5 is an Australian children's television series, originally produced by Kids Like Us and later Southern Star for the Nine Network and created by Helena Harris and Posie Graeme-Evans. And on Nick Jr. in 2004. The program is known for its educational content, and for the cast of the program, who became a recognised musical group for children outside of the series, known collectively as Hi-5. It has generated discussion about what is considered appropriate television for children. The series premiered in April 1999 on the Nine Network.

The series is designed for a pre-school audience, featuring five performers who educate and entertain through music, movement and play. Music is an integral part of the series with the band's pop appeal resonating in the program. The segments of the show are based on an educational model. The original cast was composed of Kellie Crawford, Kathleen de Leon Jones, Nathan Foley, Tim Harding and Charli Robinson. This line-up had been completely phased out by the end of 2008 and were replaced with a new line-up of performers. Hi-5 received three Logie Television Awards for Most Outstanding Children's Program.

Harris and Graeme-Evans ended their involvement with the series in 2008 when the program was sold to Southern Star and the Nine Network. The final episode of Hi-5 aired 16 December 2011 as a result of the Nine Network selling the property in 2012. A spin-off series, Hi-5 House, aired on Nick Jr. from 2013 to 2016, produced with no involvement from Nine.

Nine renewed its partnership in with the Hi-5 franchise in October 2016 and announced its plans to revive Hi-5 with a new cast in 2017.

Origins of the program

In 1998, Producer Helena Harris, creator of Bananas in Pyjamas, created "Hi-5" when her two children outgrew the Bananas. She and co-producer Posie Graeme-Evans decided the new show would be aimed at children of all ages, would include educational trends as fun and games, and would feature music and movement that would attract children's attention. Hi-5 aims to cater to a wide range of young children with a wide range of cognitive abilities and learning styles.

Child-development experts work with writers on every script. Each show is built around a simple theme like colours, music, animals, or numbers. Each show is then divided into segments that teach the concept in different ways. Music is seen as the method of joining the segments of the program together as well as highlighting the concepts and themes of each program.

The auditions for the Australian hosts were held in 1998 and the first program was broadcast in 1999. Since then, the original Australian show won five ARIA Awards for "Best Children's Album" (as of 2005), won three consecutive Australian Logie Awards (the Australian awards for Television performance and production recognition) for "Most Outstanding Children's Preschool Program" as of 2005.

Each episode features each cast member present their own individual segment, which is modelled towards a particular learning style, based on Howard Gardner's Theory of multiple intelligences (which recognises that each child learns in a different way). Shapes in Space focuses on visual and spatial awareness, with the presenter exploring shapes, colour and everyday materials such as boxes and playdough. Musicality is explored through the Making Music segment, with an emphasis on pitch, rhythm, beat, melody, and using a variety of real and pretend instruments. The presenter of Body Move encourages children to participate in movement and dance, developing physical coordination and motor development. Linguistics and aural skills are at the centre of the Word Play segment, featuring a puppet named Chatterbox who assists in the discovery of language through stories and rhymes. Puzzles and Patterns has a focus on logical thinking and mathematics, with a puppet named Jup Jup used as a tool for the presenter to complete puzzles or solve problems.

The final segment in which the cast comes together is entitled Sharing Stories, where a story is told to explore interpersonal relationships and emotions. The episodes are bookended with a Song of the Week; a pop-style feature song which corresponds with the weekly theme and sets an educational topic for the week's episodes.

In order, first to last:

In 2006, Kathleen de Leon Jones became pregnant and Sun Park was found to temporarily replace Kathleen while she went on maternity leave. The beginning of series 9 showed Kathleen introducing the audience to Sun and asking her to look after her space while she had the baby. Later in the series, Kathleen briefly returned to introduce everyone to her baby, Mikayla, but in July 2007, she made the decision to permanently leave the group to focus on being a mother.

Also in 2007, Tim Harding was involved in a serious motorcycle accident which left him with injuries that required intensive care and rehabilitation. Just prior to this, Stevie Nicholson was hired as an understudy to Tim, so he took Tim's place when he decided he could no longer continue with the group.

In February 2008, Charli Robinson announced that she would be leaving Hi-5, having just completed filming series 10, and would stay with the group until a suitable replacement was found. Soon after, Casey Burgess (daughter of veteran Australian rocker Ray Burgess) was hired as Charli's replacement and began touring with the group. but in Series 10, Casey did not appear in this season,

In October 2008, Kellie Crawford (née Hoggart) announced that she would be leaving the group at the end of the year and a month later, She has to settle down and enjoy life Nathan Foley announced that he would be leaving with Kellie, Nathan left to concentrate on a Solo music career, thus causing rumours to swirl that the pair had been fired in favour of younger, cheaper alternatives. These rumours would never come to be confirmed or denied, but in December 2008, Sun stated that Nathan and Kellie had not been pressured to leave and announced that she too would be leaving at the end of the year. The trio's final performance was at the 2008 Carols by Candlelight.

Auditions were then held to find three new Hi-5 members, although the group now had no founding members. In February 2009, on Mornings with Kerri-Anne, the new line-up was revealed, with Lauren Brant, Tim Maddren and Fely Irvine joining the cast. The cast remained the same for three years until December 2011, when Fely left the group. Her final performance was at the 2011 Carols by Candlelight. Dayen Zheng replaced Fely and the group spent the year touring.

Then, in December 2012, Casey and Tim announced that the year's Carols by Candlelight would be their last with Hi-5 and they would be leaving the group early in the new year.

Each presenter hosts an education centric segment of the show. At times, they're assisted by their co-presenters to display social skills and group problem solving skills. In Series 11, it was announced in the official site that the 4 new cast, except Stevie are 4 switching roles in their segment, except Puzzles and Patterns with Fely.

This musical segment looks at concepts such as beat, rhythm, pitch and melody using pianos, guitars, bells and other instruments and items.

From Series 10-12 in this segment promoted children's leisure and exercise with the hosts taking part in activities such as soccer, table tennis, meditation, dancing, and others.

Song of the Week

Not an educational segment as such, this segment appears at the beginning and the end of every episode with the cast performing a "Song of the Week".

In series 1-5 and series 7-13 there are nine feature songs, termed 'Songs of the Week' (the titles of which are shown below). Each series has run for nine weeks allowing five episodes to be shown a week (45 episodes) To date, there have been completed 570 episodes. Except for series 6 which had just 30 episodes. Accordingly the Series 6 was composed of 6 songs of the week and various segments which had been filmed in 2003. The lack of a new series in 2012 was also due to the same reason. Lauren, Stevie, and Dayen were the only members in 2012

Each section indicates the year in which each season aired, the title of the song on the album and the title used in the show. each song focuses on teaching the audience general common values in life and childhood, such as love, growth, imagination, fun, acceptance, adventure and more. Each week, there is a theme of the week that the song goes along with... The theme is given in the beginning of each episode in animation.

Change of the set through history

Series 4-6 In Series 3, the Hi-5 set changed. It featured a large Hi-5 logo on the stage inside a yellow circle. Three large blocks were piled on each side.

Series 7-10 The set was changed again. Now it has a large hi-5 logo inside a bigger circle with colourful patterns. Three large blocks were also put but the design was different.

Series 11-13 The set stayed the same except for in each song there are brand new backgrounds that were not used with the original cast. Also, the cheering of the audience has changed and you hear the cast cheering along with the children.

Series 4-9 In Series 3, the set changed. It featured large blocks.

Series 10 The set stayed the same but the different colors: pink, magenta, orange, and green.

Series 11-13 The set stayed the same except there are more props (for some episodes), and the design of the blocks is different.

Series 4-9 In Series 3, the set changed. It featured a blue staff with large blue musical notes at the back.

Series 10-13 The set changed again. It featured multicolored blocks and a multicolored staff with multicolored musical notes at the back. It also has instruments at the side.

Series 4-8 In Series 4, the set changed. It featured a large decoration at the back.

Series 9-10 The set changed again. It featured a blue decoration with yellow circles lighted at the back.

Series 11-13 The set stayed the same except the circles won't light anymore.

Series 4-6 The set stayed the same except the shapes are multicolored.

Series 7 The set stayed the same except instead of the puzzle, it was multicolored squares and rectangles. The large decoration was not there.

Series 8-10 The set stayed the same except there is a large decoration at the back.

Series 11-13 The set stayed the same except the color of the shapes are lighter. The large decoration was not there.

Series 4-8 In Series 3, the set changed. It featured a big blue window, a bar (for some episodes),and multicolored cabinets.

Series 9-10 The set stayed the same except the window is color purple.

Series 11 The set changed again. It featured a bar (for some episodes),and multicolored cabinets. It also has a garden.

Series 12-13 The set stayed the same except there is a pink window at the back.

Series 4-7 In Series 3, the Hi-5 set changed. It was similar to the stage but there was a yellow circle with red outline on the stage.

Series 8 The set stayed the same except there were new colors on the poles and a blue circle instead of yellow.

Series 9-11 The set stayed the same except the circle was yellow with a purple outline.

Series 12-13 The set was changed again. Instead of poles, it is a green door and window.


Cite error: <ref> tags exist for a group named "note", but no corresponding <references group="note"/> tag was found.
Retrieved from "https://nickelodeon.fandom.com/wiki/Hi-5?oldid=117137"
Community content is available under CC-BY-SA unless otherwise noted.