Nickelodeon
Register
Don't have an account?
Sign In
Advertisement
in: Shows, films, and people with wikis, Shows, Nick Jr. shows,
and 7 more
English

Hi-5 House is an Australian children's television program, a spin-off of the original Hi-5 series, which originally debuted in 1999. The series stars the internationally popular children's musical group Hi-5 and holds strong educational values while entertaining through music. Hi-5 House was filmed in Singapore and later Malaysia, the original series having only ever been filmed in Australia. The series debuted on Nick Jr. Australia on 4 November 2013 before making international premieres. The third series and final series premiered on Netflix in March 2016.

The Nine Network renewed its partnership in with the Hi-5 franchise in October 2016 and announced its plans to revive the original Hi-5 with a new cast in 2017.

The program remains similar to the format of the original, providing children with education through music and movement. Hi-5 House caters to a wide range of children's learning styles, displayed through a variety of segments within the program. Child-development experts work with writers on every script. Each show is built around a simple theme like colours, music, animals, or numbers. Each show is then divided into segments that teach the concept in different ways. Music is seen as the method of joining the segments of the program together as well as highlighting the concepts and themes of each program. In Hi-5 House, each of the traditional segments were adapted to take place in a room of the "Hi-5 House", to replicate a child's immediate learning surroundings.

Each presenter hosts an education-centric segment of the show. At times, they're assisted by their co-presenters to display social skills and group problem solving skills. In Hi-5 House, each of the traditional segments take place in a room of the house, to replicate a child's immediate learning surroundings.

This musical segment looks at concepts such as beat, rhythm, pitch and melody using pianos, guitars, bells and other instruments to his aid.

A segment first introduced in Hi-5 House, which explores the world inside Chats' box and focuses on English-learning and language. This segment also features bookworms Aristotle and Horace, and Tinka, a toy robot whom Chats teaches to speak.

Hi-5 House has five weekly themes, with each theme lasting five episodes. Each block features a Song of the Week relating to the theme, and in each episode, the cast explain the topic and what they will explore in the episode. The two songs are not the re-makes are Underwater Discovery and Living in a Rainbow from Hi-5 House Series 3. 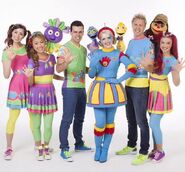 The topic of this page has a wiki of its own: Hi-5 House Wiki.