Impy & Wormer was a comic strip by James Kochalka published in Nickelodeon Magazine. In these comics, he is usually credited as "Jimminy Kroekel", which is his stage name as rock musician. The comic was often featured at the bottom of a page, underneath other comics and spanning several pages of the magazine's comic section, but sometimes it would be published as a full page comic.

November 1999 - The comic was featured at the bottom of eight subsequent pages of The Comic Book. 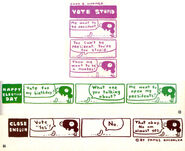 November 2004 (with an election/voting theme)

March 2006
Add a photo to this gallery

Impy & Wormer's future according to an article in the last issue of Nickelodeon Magazine.
Add a photo to this gallery
Retrieved from "https://nickelodeon.fandom.com/wiki/Impy_%26_Wormer?oldid=173394"
Community content is available under CC-BY-SA unless otherwise noted.