Tori (formerly), Trina, Sinjin, Beck being taken from her, her work being ruined, losing, the color yellow.

"Dude! Why are you rubbing my boyfriend?"

Jade West is the main antagonist of Victorious. She is Tori's former nemesis and one of Cat's best friends.

Jade was portrayed by Elizabeth Gillies, who also voiced Daphne on Winx Club.

Jade West is deep, dark, sarcastic, and down-to-earth which is shown in her attitude and clothing. Jade plays the rival figure/antagonist to the show's main character, Tori Vega after have a bad first impression, thinking Tori was flirting with Beck Oliver, her boyfriend after rubbing him from spilling the coffee on his shirt. However, later in the season, she becomes kinder and willing to become friends with Tori.

While Jade is sassy and sarcastic, she's also best friends with Cat, treating her like a sister and vice versa and she is shown to be deeply devoted to Beck.

She first appeared in "Pilot, being harsh to Tori because of her rubbing coffee off of her boyfriend's, Beck, shirt. In ways of revenge, she pours coffee on Tori in front of the whole class, humiliating her. Tori gets her revenge back on her by kissing her boyfriend during Alphabet Inprov, thus angering Jade.

Throughout Season 1 and 2 she has been cruel and harsh to Tori, but their friendship seems to blossom in Season 3, when Jade decides to give up her performance at The Platinum Music Awards, for Tori. Jade is described mean, impulsive, sarcastic, jealous, sadistic, revengeful, and devious through out the series. She has a weird fascination of blood, scissors, a lump of fat, pain and monkey fur. She is also a very talented singer proving it in the episode "Freak The Freak Out" . She is also good with writing scripts for plays or short films. 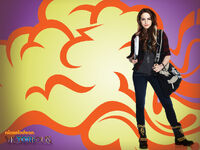 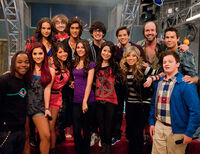