JoJo with the Big Bow

Joelle Joanie "JoJo" Siwa is an American actress, dancer, and singer born in Omaha, Nebraska. She many songs. Her most famous songs include Boomerang, Kid in a Candy Store, Hold the Drama, Every Girl's a Super Girl, High Top Shoes, Only Getting Better, and Bop!, and much more.

Joelle Joanie Siwa was born in Omaha, Nebraska on May 19, 2003 to Jessalynn Siwa (née Lombardi), a professional dance instructor from Iowa, and Dr. Tom Siwa, a chiropractor from Nebraska. She has an older brother named Jayden.

Siwa began auditioning for Abby Lee Miller's ALDC dance competition team in 2014 and was selected for the team in early 2015. At the same time, she began to appear on the Lifetime reality show Dance Moms, which follows the ALDC team which she appaered in seasons 5 and 6.

JoJo signed with Nickelodeon in 2017. She has been on Blurt! with Jace Norman, Lip Sync Battle Shorties with Nick Cannon, and much more.

In 2018, Siwa announced that she would be going on her first major concert tour in 2019, entitled D.R.E.A.M. The Tour. It is scheduled to visit a mixture of theaters, outdoor amphitheaters and stadiums, as well as indoor arenas in a total of 52 cities across the United States and Canada. Additionally, other performances will take place in the United Kingdom and Australia. The tour is scheduled to begin in Phoenix, Arizona on May 17. The first leg of the tour is scheduled to conclude on June 26 in Austin, Texas, before resuming for leg 2 on July 10 in Orlando, Florida. The final date of the second leg is scheduled to be on August 20 in Vancouver, Canada.

Nickelodeon's Not So Valentine's Special - Herself (Released, 2017)

A cartoon version of JoJo Siwa appeared in a web series "The JoJo & BowBow Show Show". 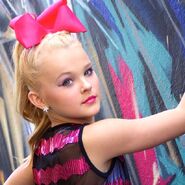 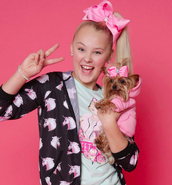 JoJo with her dog BowBow 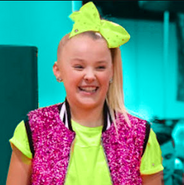 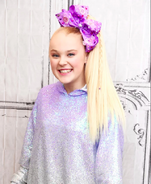 JoJo with her hair down in a YouTube Video 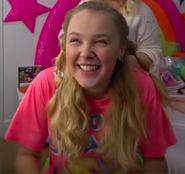 JoJo with her hair down in December 2019

One of JoJo's selfies with her hair down 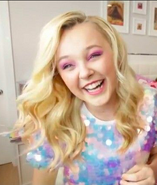 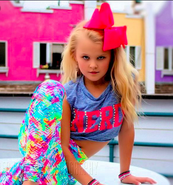 A Promotional Shot of JoJo in 2013

A promotional picture of JoJo in June 2018

A promotional picture of JoJo in circa 2016 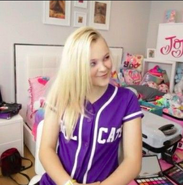 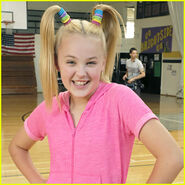 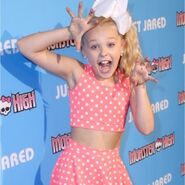 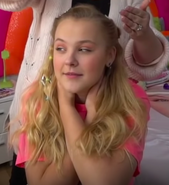 Headshot in December 2019
Add a photo to this gallery

Retrieved from "https://nickelodeon.fandom.com/wiki/JoJo_Siwa?oldid=262967"
Community content is available under CC-BY-SA unless otherwise noted.