Harvey the Announcer
Harvey in the Morning

John Harvey (born June 13, 1951), simply known as Harvey, is an American television and radio personality, often credited by his last name. He was the announcer for Double Dare and Finders Keepers. In addition to his announcer work, he hosted and built projects on Gimme Shelter, a home improvement program on the Discovery Channel in the late 1990s.

On Double Dare, he was referred to as "Harvey the Announcer" or "Harvey". Prior to his announcing duties at Nickelodeon, Harvey had worked at Philadelphia radio station WIOQ from 1977 to 1989, where he was known as "Harvey in the Morning". The show then moved to WMGK and lasted until the early 1990s.

In the early 2000s, Harvey was first a location scout and later a producer for the TLC TV series Trading Spaces.

He later appeared in animated form in the Sanjay and Craig episode "Trouble Dare".

Harvey is now running his own business, claiming to "have left show business behind" after 25 years in the industry, and is now a handyman, doing home restoration. However, he still reprises his role as "Harvey the Announcer" at occasional Double Dare reunions. 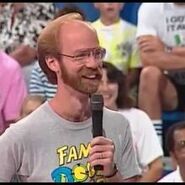 Harvey's caricature on Sanjay and Craig
Community content is available under CC-BY-SA unless otherwise noted.
Advertisement