The Magic Mailman, The Toughest Fairy in the Universe

Jorgen Von Strangle is a character from The Fairly OddParents. He is the strongest fairy in Fairy World, and as such, he is Cosmo and Wanda's commanding officer. He is married to the Tooth Fairy, and he is also the only fairy who does not have wings. He has a sadistic tendency to get his chuckles at the misfortunes of fairies smaller than him and, especially in early episodes, does not get along well with Cosmo and Wanda or their godchild, Timmy Turner, though deep down, he considers them to be his best friends. In early episodes, his voice was deeper, but now it is higher.

Jorgen is the strongest and toughest fairy in Fairy World, and is the commander of the Fairy godparents, but not of all the fairy world (Because probably the Fairy Council probably command more than him), although the extent of how powerful or how much he commands is not exactly clear. When Jorgen was first introduced, he was more of an enemy of Timmy, and in a few cases tried to get Timmy's godparents taken away. He often took great pleasure in harassing everyone around him. As the show went on, Jorgen seemed to warm up to Timmy, Cosmo and Wanda, and he has become more of an ally than an adversary. He even admitted that Cosmo, Wanda, and Timmy were his closest friends. Sometimes Timmy must also clean up after the messes Jorgen makes, like when Fairy World lost all the power it was drawing from Mr. Crocker when he stopped believing in fairies, and when Foop escaped Jorgen's custody in Abracatraz to terrorize Poof

Jorgen has tanned complexion, a white flattop hairdo, and eyes that are as blue as Timmy's. He is also bulking with a perfect and very humanoid body (unlike the light, skinny, weak, pointy bodies like other fairies, but a stronger, and more athletic body). His outfit is mainly a tight muscle green war tank top, black knee-high steeled toe combat boots, and green army camouflage pants, as well as spiked bracelets on his arms and studded boots, which is a homage to the military uniform worn by Arnold Schwarzenegger's characters Alan "Dutch" Schaefer from the 1987 sci-fi thriller Predator. He also has the biggest chin in Fairy World, and the second biggest chin in FOP universe (after the Crimson Chin). A joke in the series is that his head is shaped like the number five, due to his big chin and flattop hair. Other jokes include the several times where he tends to show off his glutes in front of everyone, and how his size increases and decreases per scene (Usually he is only a head or two over the size of a normal human adult, yet on other occasions, to emphasize his great power and strength, he will appear to be at least 8 feet tall). He does not have wings, but in the Oh Yeah! Cartoons short The Temp!, it was shown that he uses a jet-pack instead, and instead of a wand, he carries what looks like a staff taller than he is, with a huge yellow star on its tip.

Jorgen has a personality of toughness, but, like all fairies, he is scared of butterfly nets. He is very sadistic, and laughs only toward the misfortune of others. His only friends are Cosmo, Wanda and Timmy Turner as revealed in "Teeth for Two", as his tendency to harass and bully others leave him with little friends, whereas the trio seem to have more tolerance to his sadistic behavior. His closeness toward them is shown when the Tooth Fairy dumped him for a while, as he cried for around 2 weeks hugging (or choking) Cosmo and Wanda which annoyed Timmy, causing him to do a lot of insane stuff until Timmy could get Jorgen and the Tooth Fairy back together. This showed how much the three cared for him as well. Jorgen seems to accept everybody, but hates overbearing stupidity (such as Cosmo), loud nagging (such as Wanda), and constant ignorance (such as Timmy).

Jorgen is also extremely arrogant (and sometimes even vain), often berating others while showing off his large muscles. He loves to inflict humiliation and pain, but is a very close friend otherwise. He even takes care of Binky and reads him a story when he is sick (in "Timmy the Barbarian"). In the Oh Yeah! shorts and the first season, Jorgen often showed limited emotion, with only an occasional smirk whenever he won something, such as an argument, a court case, or a competition. From the second season onward, Jorgen showed more emotion, mainly laughing in an evil, and slightly odd fashion. In Abra-Catastrophe!, he becomes a bit friendlier, possibly because Timmy showed promise after keeping his fairies for a whole year, something most children his age found difficult. Currently, he is a much friendlier person than in the first three seasons, treating his friends better.

Jorgen's dress, accent and mannerisms are apparently a parody of Eastern European action heroes of the 1980s such as Arnold Schwarzenegger, Dolph Lundgren and Jean-Claude Van Damme. He is also loosely based on the Babylonian sky god Anu (whose Greek equivalent would be Ouranos). 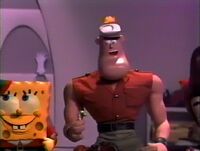 Jorgen with SpongeBob in "Holiday Party". 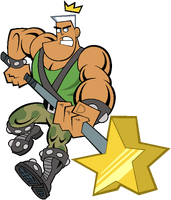 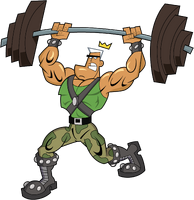 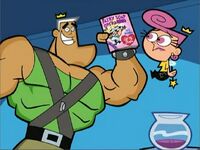