Nickelodeon
Register
Don't have an account?
Sign In
Advertisement
in: Character stubs, The Fairly OddParents characters, Fairies,
and 5 more

"I so enjoy looking at myself in the mirror. It turns Juandissimo into... two dissimos."

Juandissimo Magnifico is a recurring character on The Fairly OddParents. He is Wanda's narcissistic ex-boyfriend who still pines for her despite her marriage to Cosmo, and he is also Remy Buxaplenty's fairy godparent. Over the course of the series, Juandissimo goes from a villain, to a minor annoyance, to somewhat of a friend to Timmy and his fairies.

Although not as big as Jorgen Von Strangle, Juandissimo looks more muscular than most other fairies. He speaks in a Mexican-Spanish accent and thinks that he is the best-looking fairy in Fairy World. He has black hair tied in a pony tail, with purple highlights, and wears a white shirt that often rips whenever he strikes a pose. Juandissimo's iris color is purple, which is also the color of whatever he shape-shifts into.

Juandissimo often compliments Wanda, as he is still infatuated with her and constantly tries to get her back. Cosmo is extremely jealous of him as he makes attempts to steal her. He is known to rip his tight white shirts to show off his muscles, sometimes even several times consecutively after he poofs a new one back on. He works as a well sought-after (by various female fairies) massage practitioner.

Juandissimo seems to be an infamously bad cook, for as one of Jorgen's punishments for Remy was that he could keep Juandissimo on the condition that he eats only his cooking. Juandissimo has also been shown on certain episodes to possibly have Halitophobia (fear of people with bad breath), as shown in "Teacher's Pet", "Stupid Cupid", and "Wishology". 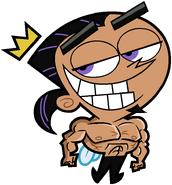