The topic of this page has a wiki of its own: KaBlam! Wiki. 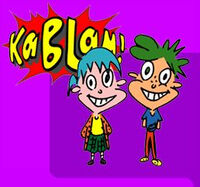 KaBlam! is an Nickelodeon Nicktoons series that ran from 1996 to 2000. It features a collection of short films in several different styles of animation, bridged by the characters of Henry and June, who introduce the shorts, and have adventures of their own.

Retrieved from "https://nickelodeon.fandom.com/wiki/KaBlam!?oldid=76495"
Community content is available under CC-BY-SA unless otherwise noted.