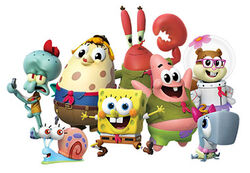 Kamp Koral: SpongeBob's Under Years (also referred to as just Kamp Koral in its title) is the first spin-off series based on SpongeBob SquarePants. It was confirmed by Nickelodeon on June 4, 2019.[2] It is executive produced by Marc Ceccarelli and Vincent Waller.

The spin-off uses designs and elements from The SpongeBob Movie: Sponge on the Run. It features SpongeBob and his pals spending the summer "building underwater campfires, catching wild jellyfish, and swimming in Lake Yuckymuck at the craziest camp in the kelp forest, Kamp Koral."[2]

The series premiered on Paramount+ on March 4, 2021. It aired on Nickelodeon on April 2, 2021 (with The Barbarian and the Troll premiering right after).

It was announced that the show will have 13 additional episodes with the second season having 13 episodes.[3]

New characters also appear, such as a pair of narwhals named Narlene and Nobby.

The series' first half of its first season was released on DVD on March 8, 2022.