"Befriend the SpongeBob. Then, when the time is just right, take the Krabby Patty!"

Karen Plankton is a main character in SpongeBob SquarePants. She is voiced by Jill Talley. She is a sentient computer who is the co-owner of the Chum Bucket, and is the computer wife of Plankton. She is usually stationed in the Chum Bucket laboratory. She and Plankton are constantly scheming to steal Mr. Krabs' secret formula for Krabby Patties. Karen is typically the brains of the operation, coming up with complex plans to run Krabs out of business, although Plankton tends to take all the credit for them.

Karen is seen in two main forms: a big supercomputer on one wall of the Chum Bucket laboratory, and a portable computer with wheels, first seen in The SpongeBob SquarePants Movie. Her mobile form is currently the most common one. In both forms, she is mainly a blue-bordered black screen with a neon green line that moves whenever she talks.

In the first and third film she's white.

Karen is first seen when Plankton complains about his failed plans and she reminds him of Plan Z.

After Neptune froze Krabs and gave SpongeBob three days to get the crown back, Plankton steals the formula and sells Krabby Patties at the Chum Bucket. Karen, however, reveals that if SpongeBob and Patrick finds the crown Neptune will discover that he's the true thief. However, Plankton tells her that he hired a killer named Dennis to get rid of them.

After Plankton used the Chum Bucket helmets to mind control all the residents in Bikini Bottom to enslave the city (especially Squidward, who attempted tried to tell Neptune that he framed Mr. Krabs, which led to him being captured and mind controlled), Karen is seen being treated like a queen.

When SpongeBob frees everyone with rock and roll and saves Mr. Krabs, Karen is shown to have fun as well, much to Plankton's dismay.

Although the movie was intended to be the show's ending, what happens to Karen at the end of the film is unknown.

Karen is Plankton's own creation, which he built from a calculator and a mass of wires. She was Plankton's first invention when he was in grade school, and she dated Plankton. When Plankton decided to become a villain, Karen did as well, because he created her. Her system is built into most of Plankton's machines, including the Chum Bucket itself, so that she and Plankton can always be in touch. Specifically, Karen is a Mark II Surplus UNIVAC with 256 gigabytes of random-access memory.

Karen has many jobs at the Chum Bucket, including busser, chef and cashier. She also tends to stay more focused than Plankton on their mission of stealing Krabs' formula. Despite being built by Plankton (as well as constantly assisting him), Karen has shown to have a very kindhearted side to her. She does occasionally blow up on Plankton, but he usually is in the wrong. Karen often reminds him to stay on task and encourages him to keep going when he loses confidence. She is a friend of Sandy Cheeks, who is also intelligent and interested in science. Karen has a habit of addressing SpongeBob as "the SpongeBob," although this has been phased out in recent episodes. 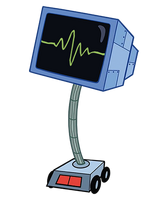 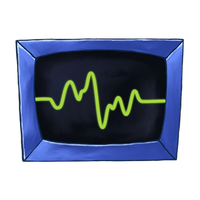 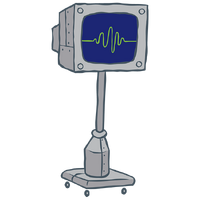 Karen’s design in the movie

Karen's screen design in the movie 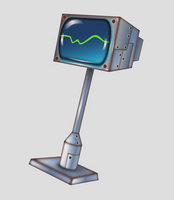 An icon of Karen 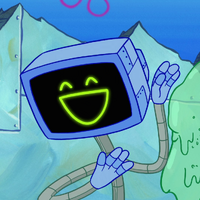 Karen with a face 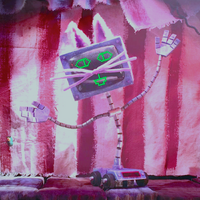 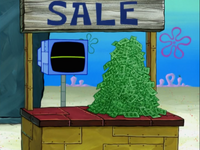 Karen with a stack of money

Karen turning into a patty monster

Karen talking to Plankton and SpongeBob