Nickelodeon
Register
Don't have an account?
Sign In
Advertisement
in: Characters, Females, Avatar: The Last Airbender characters,
and 11 more
English

"I will never, ever turn my back on people who need me!"
Katara is a character in Avatar: The Last Airbender. The character, created by Michael Dante DiMartino and Bryan Konietzko, was voiced by Mae Whitman and was portrayed by Nicola Peltz in the live-action film adaptation.

Katara is a waterbender from the South Pole's Water Tribe, a race of people who can control and manipulate water. Katara earns the title of Master Waterbender from Master Paku of the Northern Water Tribe by the age of fourteen, something very rare. She is the last remaining waterbender in the Southern Tribe (Katara's Home) because of continuous raids on her village by the Fire Nation, specifically by the Southern Raiders. She, along with her older brother, Sokka, discover an Airbender named Aang frozen in an iceberg, the long-lost Avatar, and accompanies him on his quest to defeat the imperialistic Fire Nation and bring peace to the war-torn nations.

According to the unaired pilot episode included on the Complete Book 1 Collection DVD set, Katara's name was originally Kya, but was changed. The name Kya would be later used for her deceased mother. In “Tales of Ba Sing Se”, Katara's name was written as 卡 塔 拉. Kǎ (卡) means to check, block, or card; Tǎ (塔) means pagoda; and Lā (拉) means to pull. The character Lā is the same La as the Ocean Spirit's name from the season one's finale, while the character for Kǎ also appears in Sokka's name.

In the commentary of the unaired pilot episode, co creators Bryan Konietzko and Michael Dante DiMartino state that Katara's “hair loopies” used to hang down but was changed because the animators said it would be too hard to animate and suggested that they’d be looped back rather than beaded locks.

Katara grew up as the mature, motherly figure of her family and tribe. When Katara was eight years old, her mother gave her life for her daughter's during a Fire Nation raid in order to protect her identity as the only Waterbender in the tribe. Katara managed to locate her mother's killer, but was unable to kill him when she thought him unworthy of her revenge.

Though her interests lay in developing her waterbending skills, she resigns herself to cooking and cleaning duties while her brother, Sokka, trains to become a warrior. Later, Katara's father Hakoda and the other tribesmen journey to the Earth Kingdom to participate in the war effort against the Fire Nation. This leaves her, alongside her brother and grandmother, Kanna ("Gran Gran"), to look after the tribe.

The events of Avatar: The Last Airbender begin two years following this, during a spearfishing expedition, when Katara and Sokka find Aang in suspended animation inside an iceberg. Katara frees him and comes to discover that Aang is the Avatar. With a common goal of mastering waterbending, Katara, along with her brother, joins Aang in the journey to the Northern Water Tribe to find a waterbending master to teach them. Upon arrival, Master Pakku refuses her apprenticeship, because she is female. However, after noticing an engagement gift he gave to Katara's grandmother half a century ago, he agrees to teach her. Katara advances so quickly in her art during their stay in the Northern Water Tribe that Pakku formally deems her capable enough to be Aang's waterbending teacher.

The second season opens with Katara leaving the North Pole and receiving water from its Spirit Oasis. Katara then journeys with Aang to the Earth Kingdom for him to learn earthbending. While at an Earth Kingdom stronghold, General Fong places Katara's life in danger in an attempt to get Aang to enter the Avatar State, resulting in Aang destroying a whole courtyard. Aang leaves, heading for Omashu to meet up with an old friend, King Bumi. When he gets there, however, he finds that Omashu has been taken over by the Fire Nation's princess, Azula. After Toph joins the group to teach Aang, Katara and Toph often quarrel until their differences are settled. While in Ba Sing Se, Katara is thrown into a prison with Zuko, a sometime antagonist. Initially hostile, she speaks to him and begins to believe he has changed for the better. She then offers to heal his scar. Before that can happen, Aang and Iroh show up to save the two. During the following battle, Aang is distracted by an image of Katara and cannot ascend into the Avatar state properly, and is mortally wounded. After Aang is hurt Katara confronts Azula in a fierce battle and actually manages to push Azula back, until Zuko intervenes. She then attempts to take both Azula and Zuko as opponents by herself. They eventually overwhelm her, but she manages to save Aang and escape. At the end of Season Two, Katara uses the water from the Spirit Oasis to attempt to heal Aang.

While on the ship that the group obtains to reach the Fire Nation in the third season, they are attacked by another Fire Nation ship that discovered their false identity, Katara aids in their escape. While in a village burdened by the Fire Nation's pollution, Katara surreptitiously disguises herself as the river spirit known as the Painted Lady in order to help the village. While staying with an old woman the group meets in the woods, they find that she is a Waterbender of the Southern Tribe. Later, she offers to teach Katara the technique of "bloodbending", which enables the user to control the movements of animals. When Katara refuses to learn this technique, Hama bloodbends Aang and Sokka, forcing Katara to use the power herself to save her friends. In "The Western Air Temple", when Zuko offers to join Team Avatar, it is Katara who makes the first move to attack him and send him off. At the end of the episode Katara makes a threat to Zuko that if he so much as thinks to hurt Aang, she will end Zuko's life. Zuko does not gain Katara's trust until "The Southern Raiders", in which Zuko helps Katara find the man who killed her and Sokka's mother, Kya. She sets out with the intent to kill him, but ultimately withholds.

During the Sozin's Comet two-hour premiere, Katara goes with Zuko to stop Azula from becoming the new Fire Lord. When Azula and Zuko clash, Azula attempts to blast Katara with lightning. Zuko, however, jumps in the way, and is badly wounded, forcing Katara to fight. Having captured Azula, she heals Zuko and they wait for the outcome of Aang's battle with Phoenix King Ozai. When the war ends, she is seen in Ba Sing Se, living a peaceful life. The story ends with Aang and Katara kissing.

Katara's abilities have greatly improved since the very first episode. At the outset, she had little control over her waterbending and often needed someone else to help her defeat an opponent, though her temper, which would increase her waterbending tenfold, would often get in the way by causing unnecessary destruction. As time went on, thanks to practicing diligently, studying a waterbending scroll, and then studying under Master Pakku, her waterbending rapidly improved, to the point that she was considered a Waterbending Master.

Katara can use water to cut through objects, can summon lashing waves and whips of varying sizes, cover herself with a sheath of water and manipulate it at will, surf on a surfboard made out of ice, run and stand on the sheer surface of water, melt and control existing ice, forming it into various shapes, and can freeze water and objects surrounded by water with little effort, create giant walls of mist and steam, transform steam into ice instantly, or evaporate large amounts of water. She has even used the water from her own sweat to break herself out of a wooden jail-cell. She has learned from Hama to use and take the water from the moisture in the air, in plants, and underground within the Earth. She also has learned from Hama to manipulate people and animals using the water within their bodies through a rare and sinister form of waterbending called "Bloodbending", which can only be used during a full moon. Katara learned this skill in a day, while it took Hama years to perfect the technique. She has used bloodbending against Hama to stop her from harming Aang and Sokka, albeit reluctantly, and again on an individual who she had thought had killed her mother without remorse.

Katara has proven herself a very powerful Waterbender, most notably during her duel with Hama in single combat, bloodbending effectively first time around and holding her own against Sokka, an upcoming swordsman, and Aang, the Avatar, when Hama was manipulating their bodies against their will. She also has shown to be nearly as skilled as Aang even though he can bend more elements. She was able to defeat Zuko, and even turn the tides on Zuko's sister Azula and then later in the series defeat her by chaining her to a grate. In the midst of their battle, Master Pakku was so impressed that he, grudgingly, had to admit that she is a powerful waterbender in her own right and later deemed her a master Waterbender under his study.

Katara is one of the few water benders born with the Waterbending sub-talent to heal using water as a catalyst, manifesting itself when she was burned by Aang when he first attempted Firebending. Her ability to heal has only proven to get better under the tutelage of the Northern Water Tribe's Head Healer, Yagoda. She has used it to relieve sickness, temporarily undo brainwashing, heal seemingly mortal wounds such as burns and bleeding injuries, and even the almost dead with the help of the magical water from the Spirit Oasis. Her healing powers have limits, as she cannot cure all sicknesses, completely undo brain damage, or heal internal injuries and birth defects.

Being another protagonist of the show, Katara also receives a lot of attention from reviewers. She is described as "Smart, capable; almost a generic anime heroine". In addition to these features, she also is "kind, brave, and passionate."

Katara is also very nurturing, acting as den mother for the group. She usually cooks their meals and washes their clothes. She takes responsibility for her brother, Sokka, and later Toph, and especially Aang. Her maternal instincts, while with good intentions, can sometimes make her bossy.

In addition to that she is very stubborn, often butting heads with the abrasive, independent and often hygienically challenged Toph. She feels that she should help everybody, and as a result she was hurt by a boy named Jet. Her eagerness to help everyone and stubbornness pays off, however, when she stands up to Sokka, saying she will not turn her back on anyone who needs her, in order to save a village.

Katara matures greatly through the course of the series. In the beginning of the story she shows some immature characteristics, such as her jealousy towards Aang when he is able to learn water bending moves very quickly. But as the story proceeds she proves to be the clear thinker in the group. For example, when the team is stranded in the desert and everyone's hopes are down, Katara refuses to give up, makes good decisions and leads everyone through the desert.

Appearances in other media

Katara's character has appeared in the three video games based on the show - Avatar: The Last Airbender, The Burning Earth, and Into the inferno. Like Aang, Katara also appears on some Avatar T-shirts sold by Nick, as well as in Tokyopop's Avatar Cine-Manga. Nicola Peltz portrayed the character in The Last Airbender live-action film. 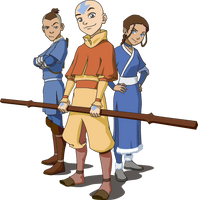 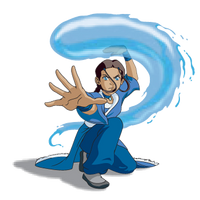 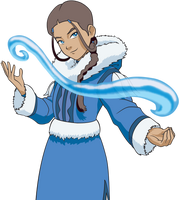 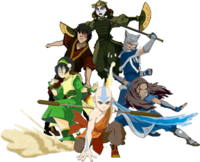 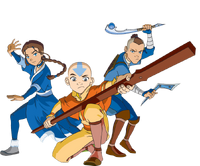 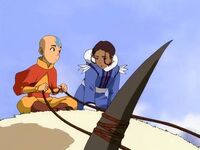 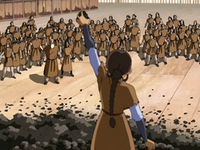