Lauren Keyana "Keke" Palmer (born August 26, 1993) is an American actress and singer. She starred as True Jackson in the Nickelodeon sitcom True Jackson, VP and provided the voice of Aisha in Nickelodeon's revival of Winx Club.

In 2007, she guest starred in the Just Jordan episode "Fame Game" as C.C. Livingston. She has competed in at least one celebrity episode of BrainSurge and appeared as herself in the Degrassi episode "Spring Fever". 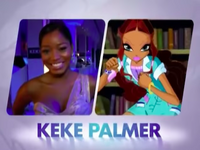