Kel Kimble is one of the two main characters from Kenan and Kel, portrayed by Kel Mitchell. He is Kenan Rockmore's dim-witted and clumsy best friend who loves orange soda. Kel's parents are rich, busy scientists, so he often visits and stays at Kenan's house to keep him company, while trying to avoid Kenan's little sister, Kyra, who has a crush on him.

He might resist following Kenan's schemes at first, but ultimately he is included anyway and Kel somehow usually ruins them, although there are a few episodes that end on a high note. Kel is also an incredible painter, and is always wearing at least one colorful hat during each episode.

He is scared of pancakes, airplanes, butterflies, brassieres, Berlin, and monkeys. His catchphrase is "AWWWW, HERE IT GOES!" which he says at the beginning and end of each show once he said it for a very long time.

An interesting and rather credible theory states that Kel is actually an evil genius and that every disaster he causes is both planned and initiated intentionally - to watch the show with this in mind offers a different and quite interesting experience. In the first episode and throughout the first and second season, Kel is a tad smarter, noticeably more "paranoid"/neurotic to Kenan's schemes, and a little more independent but then is changed to become more of a comic relief for the rest of the series. It was revealed in "I.Q. Can Do Better" that Kel is actually a "genius" after scoring a 98 on his IQ test out of a possible 100 to Kenan's 90. Kel is shown in some episodes to be very talented and smart, but lack common sense. 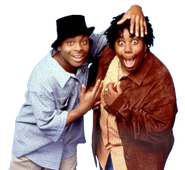