Nickelodeon
Register
Don't have an account?
Sign In
Advertisement
in: Shows with wikis, Nickelodeon, Kids' Choice Awards,
and 3 more
English

View source
watch 01:54
Obi-Wan Finale - The Loop
Do you like this video?
Play Sound 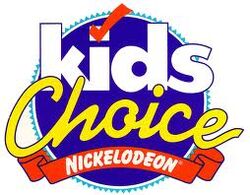 This show has a wiki of its own: Kids' Choice Awards Wiki.

The Nickelodeon Kids' Choice Awards, also known as the Kids' Choice Awards or KCAs for short, are an annual awards show that have been broadcast on Nickelodeon since 1988 (with the exception of 1993). The award show usually airs on a Saturday night in the spring (usually in late March or early April) to honor the previous year's biggest television, movie, and music acts, as voted by Nickelodeon viewers. The winners receive a hollow orange blimp with the Nickelodeon logo on it. During the awards' show, celebrities and the audience are splashed with slime. The show is often followed up by the premiere of a new Nickelodeon original series, and/or preceded by a new episode of an already-airing Nickelodeon show.

The latest Kids' Choice Awards is the 35th edition, hosted by Miranda Cosgrove and Rob Gronkowksi. The show was broadcast live on April 9, 2022. The ceremony was held at the Barker Hangar at Santa Monica Airport in Los Angeles, CA. Jack Harlow performed "Nail Tech", “Industry Baby” (without Lil Nas X), and his newest single, “First Class". Kid Cudi also performed with his new single, "Stars In The Sky", from the Sonic The Hedgehog 2 soundtrack, and "Pursuit Of Happiness".