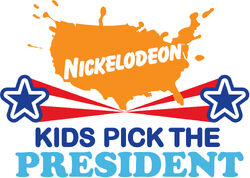 The specials began in 1988 as part of a yearly "Kids Vote" election-related coverage, in part as a way to encourage children in Nickelodeon's audience to become engaged in the political process, and partly for comedic value.

The 1992 election was sponsored by Target Corporation, and promoted by newspaper advertisements. Children voted in-person at Target's stores, which were used as polling stations.

In the 1996 election, conducted by televote, children picked Bill Clinton over Bob Dole and Ross Perot.

In the 2000 poll, 400,000 people participated via an 800 number. Both Al Gore and George W. Bush made campaign appearances at the Nickelodeon studios.

In 2004, Nickelodeon promoted the event with interstitials throughout its regular programming, features in Nickelodeon Magazine, online activities, and a book. Both John Kerry and George W. Bush declined to appear, stating they were too busy. The results were announced by Linda Ellerbee on U-Pick Live. Kerry received 57 percent of the vote; President Bush got 43 percent. This would be the first vote where its results went against those of the general election.

In 2008, 2.2 million people participated in the event. Both major candidates participated, and filmed television commercials promoting the event. Participants were allowed to vote, without any voter eligibility or verification, on a non-partisan page of Nickelodeon's website that outlined the candidates' positions on various issues.Barack Obama received 51 percent (1,167,087 votes), and John McCain received 49 percent (1,129,945 votes). Linda Ellerbee announced the results live again in 2008.

In 2012, Obama won with 65% of the vote over Republican challenger Mitt Romney. Romney declined to participate, citing scheduling constraints; instead, clips were shown from previous campaign events in which the participants' questions were addressed. In contrast, Obama invited the participants to meet him in person at the White House to answer their questions. The decision by Romney to not participate was considered by Nick News host Linda Ellerbee to be an example of his lack of "respect" for youth; the Obama campaign also responded by stating that children "demand details", and wanted "answers on why Romney could increase their class sizes, eliminate their teacher's jobs, raise taxes on their families and slash funding for Big Bird."

In 2016, Nickelodeon's poll conducted three candidates: Republican Donald Trump, Democrat Hillary Clinton, and Libertarian Gary Johnson. Nickelodeon only offered information on the Democratic and Republican nominees. It was the first election since Ellerbee's , and this was reflected in coverage which was seen less on Nickelodeon than in the past, with the results offered in a short feature during a Saturday night 'theme night' revolving around elections in episodes of the network's sitcom block. Clinton was the winner, with 53 percent of the vote; Trump received 36 percent while Johnson received 11 percent; this would be the second time the kids vote would not match the outcome of the general election.