"The League of Villains"

Evil, Jimmy and his friends in danger, Poultra, sacrifices

His plans failing, commercials, his minions disobeying him, Retroville

"Tell me. When did it come unacceptable to approach my royal throne UNANNOUNCED?!?"
"Bring out the humans!"
"Citizens of Yolkus! I, King Goobot V, give you...Sacrifice!"
"You've not seen the last of us, Jimmy Neutron!"

King Goobot V is a major villain in The Adventures of Jimmy Neutron, Boy Genius. He is the short-tempered, impatient, sadistic, cruel and rude king and supreme ruler of the planet Yolkus, inhabited by gooey egg-shaped aliens called Yolkians. Goobot appears in the theatrical movie and the episodes "The Eggpire Strikes Back" and "The League of Villains", as well as the simulator ride Jimmy Neutron's Nicktoon Blast. Although Professor Calamitous was the most recurring villain of the series, King Goobot is considered more iconic.

He was mentioned in "Win, Lose and Kaboom!" when Cindy was warning Jimmy about the consequences of answering the space rock.

It's possible that Goobot is still in the Late Cretaceous period with the other villains, despite in Jimmy's opinion, he's "millions of years ahead of us."

His Planet Sheen counterpart is Dorkus. 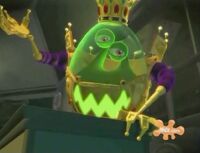