"I think I want to try it for a second time!"

King Neptune (voiced by John O'Hurley/Jeffrey Tambor) is a mighty, trident-wielding merman god who rules the sea on SpongeBob SquarePants, based on the mythological deity of the same name. In the series, Neptune lives in a palace in Atlantis with his wife Amphitrite and son Triton. He is usually portrayed as arrogant and selfish, showing little sympathy for the sea's fish populace. Neptune has a mostly blue-green color scheme with a long brown beard and hair.

A different King Neptune is featured in The SpongeBob SquarePants Movie. In the film, he resides near Bikini Bottom with his daughter Mindy and appears to be less of a god and more of a king with a greenish color scheme, a royal robe, neatly-trimmed red hair, a domed crown to cover his bald spot, and powers limited to what can be exercised through his trident. 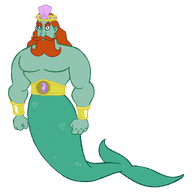