Kirk Fairbanks Fogg (born September 18, 1959) was the host of Legends of the Hidden Temple. In the show's first season, he also announced the Moat Crossing, asked the tiebreaker questions, and handed out the Pendants of Life before the Temple Run (the first two tasks were done by Olmec in later seasons). He played a similar role in the movie adaptation and later voiced an animated version of himself in The Loud House episode "Legends".

In addition to hosting Legends, Fogg has appeared in over two hundred national commercials, and had a role as the District Attorney on the pilot of the UPN television series Veronica Mars. He never was a panelist on Figure It Out like other Nickelodeon television show celebrities. 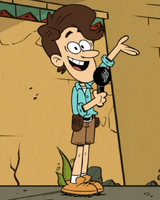