Krumm is one of main characters in Aaahh!!! Real Monsters. He is a large flesh-colored monster with two separate eyes which he carries around with him due to him having no sockets with which to insert them in. Incredibly hairy, constantly filthy and outrageously smelly, Krumm can make humans scream without lifting a dirty fingernail. That's lucky for him, because he's kind of an oaf. He's also one of the best friends a monster could have. He keeps a close eye on Ickis and Oblina, which is easy enough since he holds an eyeball in each hand. When he needs to use his hands, he puts his eyeballs somewhere safe--like in his mouth! It's all part of Krumm's monster charm. The odor from his stinky armpits will make people faint if the sight of him doesn't 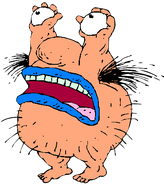 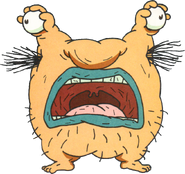 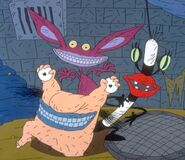 Krumm, Daggett, and Stimpy in a Thanksgiving promo 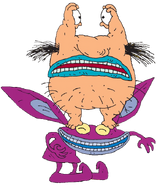 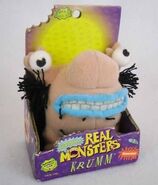 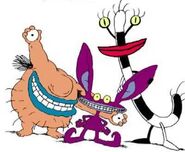 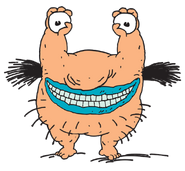 Retrieved from "https://nickelodeon.fandom.com/wiki/Krumm?oldid=256514"
Community content is available under CC-BY-SA unless otherwise noted.