Bubble Buddy (formerly), Squidward Tentacles (when he calls protein "glop" and mocks about people who drank them)

Being weak and chubby, Krabby Patties (formerly), people calling protein "glop" and mocking about people who drink them

"You guys wanna go lift some weights?"
"Livin' like Larry."
"Last time I saw a moon that big, it was in a locker room."
Larry the Lobster is a recurring side character[1] in SpongeBob SquarePants. He is a muscular, vascular, red cod lobster who is a common patron and lifeguard of Bikini Bottom's popular beach, Goo Lagoon. He is voiced by Doug Lawrence and first appears in the episode "Ripped Pants".

Larry is a bodybuilder and is often seen competing or working out with other sea creatures. He is always seen in his swim trunks, even when he is not at the beach. He regularly goes to Bikini Bottom's beach, Goo Lagoon, and works as a lifeguard there, as seen most notably in "SpongeGuard on Duty." Larry is one of the strongest creatures in Bikini Bottom. Larry is very popular and is idolized by many other beachgoers. In "Band Geeks," it is stated that Larry's heart once gave out from too many tanning pills, and in "Roller Cowards" he is revealed to have a bad armpit odor that is caused by adrenaline. Larry has also run for Bikini Bottom president against Patrick Star. His campaign slogan is "Do you want a president that does not drool when he thinks? Vote for Larry!" Despite this, he lost to Patrick by about 90% of the votes.

Larry's implied parents appear in "SpongeGuard on Duty". However, they are not lobsters; they are generic "old person" character models. Larry kicks his own parents off of the beach for being too "old and unsightly," in an ironically polite manner. 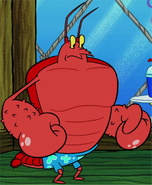