Nickelodeon
Register
Don't have an account?
Sign In
Advertisement
in: Shows with wikis, Nick Jr. shows, Cancelled shows,
and 8 more

This show has a wiki of its own: LazyTown Wiki.

LazyTown is a television series created by Magnús Scheving. It was commissioned by Nickelodeon for the Nick Jr. block, but the show is owned by an external company, LazyTown Entertainment.

Nickelodeon aired the first and second seasons of LazyTown from 2004 until 2007. Nickelodeon helped cast some of the puppeteers for the show at their New York office, including David Matthew Feldman as Mayor Meanswell. In September 2011, Turner Broadcasting System Europe purchased the show's production company and commissioned more seasons.

The first and second seasons premiered on Nickelodeon's Nick Jr. block from 2004 through 2007. The last rerun aired on the Nick Jr. Channel in 2010.

The next two seasons were commissioned by Turner Broadcasting, so they instead premiered first on Turner-owned channels in Europe. They did not air on Nickelodeon, but they did eventually air on a different Viacom-owned channel, Channel 5 in the UK. The Channel 5 page for LazyTown is archived here. 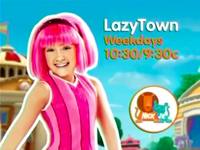 Ziggy, Stephanie and Trixie on the cover of Nick Jr. Magazine

Poster for a Nick Jr. premiere 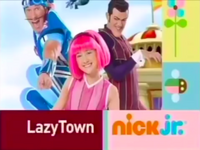