Nickelodeon
Register
Don't have an account?
Sign In
Advertisement
in: Stubs, Legends of the Hidden Temple, TV movies

Legends of the Hidden Temple

Legends of the Hidden Temple is a Nickelodeon made-for-TV movie based on the game show of the same name, which aired on November 26, 2016. Announced in March 2016, the film stars Isabela Moner, Colin Critchley and Jet Jurgensmeyer as three siblings who break away from a lackluster tour in a jungle, finding themselves immersed in a high-stakes adventure involving obstacles that they must complete in order to escape alive. The film was directed by Joe Menendez and written by Jonny Umansky, Zach Hyatt, and Alex J. Reid. It features elements of the original show, including Olmec, the Steps of Knowledge, and cameos from a green monkey, red jaguar and silver snakes, among others.[1][2][3] Original host Kirk Fogg returns also, as a fictionalized version of himself and Dee Bradley Baker reprises his role as Olmec. [4][5]

A seemingly ordinary (yet boring) jungle tour becomes a battle for survival when three siblings, Sadie, Noah, and Dudley accidentally stumbles on a not-so-mythical hidden temple. Armed with only their knowledge and wits, they must overcome the series of temple puzzles and outsmart the 'evil' temple guards if they hopes to escape the temple alive.

Olmec is Back! Legends of the Hidden Temple The Movie NickRewind

"Legends of the Hidden Temple The Movie" Digital Exclusive NickRewind 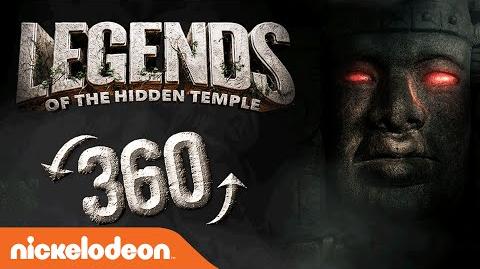 Legends of the Hidden Temple The 360 Experience Nick