"Hot diggity dang! Turn it on up to 11!"
Liam Hunnicut is one of Lincoln's best friends and schoolmates on The Loud House. He is a Southern-accented red-haired boy who lives on a farm, appears to be proficient at playing basketball. He is also a very good baseball pitcher and enjoys rock music.

His first appearance was in "Overnight Success", as one of the kids Lincoln invited to his sleepover, after Lincoln had a falling out with Clyde. Since then, he has made other appearances in many later episodes, usually appearing in Lincoln and Clyde's friend group alongside Zach, Rusty, and Stella. His most prominent role to date was in Season 5's "Cow Pie Kid", in which he becomes the new pitcher for Lynn's baseball team, the Royal Woods Squirrels Kangaroos. 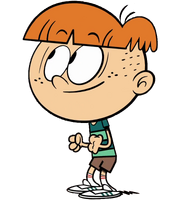