Nickelodeon
Register
Don't have an account?
Sign In
Advertisement
in: Stubs, The Loud House cast members, Voice actors,
and 8 more

Liliana Berry Davis Mumy (born April 16, 1994) is an American actress. Some of her notable non-Nickelodeon roles have been as Jessica Baker in the Cheaper by the Dozen movies with Steve Martin, Lucille Miller in The Santa Clause 2 and 3 with Tim Allen, Mertle Edmonds on the Disney Channel original series Lilo & Stitch: The Series, Panini on the Cartoon Network original series Chowder and Wadi on The Secret Saturdays. Her father is actor Bill Mumy, famous for his roles in the classic science fiction TV series Lost in Space and Babylon 5.

On Nickelodeon, Mumy is currently known as the voice of Leni Loud on The Loud House. She also voiced Roxy on Winx Club and Human Kimberly on Catscratch. 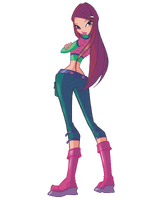