Avatar: The Last Airbender is an Emmy award-winning animated television series that broadcast for three seasons on Nickelodeon and the Nicktoons Network. The series deals with a war that was started by the Fire Nation as an attempt to conquer the world, due to the absence of the Avatar, who alone holds the power to balance the Fire Nation with the other three countries: the Air Nomads, Earth Kingdom, and the Water Tribes and create peace. Because of its absence, the world has undergone a century of war, one which eliminated the Air Nomads, pushed the Water Tribes to the brink of extinction, and resulted in the near-total colonization of the Earth Kingdom.

The main protagonist of the series is Aang, the most recent incarnation of the Avatar, who is released from an iceberg after being accidentally cryogenically frozen for a hundred years. With his new friends Katara and Sokka, who initially freed him, and later Toph, Aang sets out to master the three unlearned elements and end the war that has ravaged the world during his absence. While primarily focused on Aang, the series also focuses on Zuko, crown prince of the nation that started a world-domination campaign during the Avatar's absence. Zuko is initially portrayed as an antagonist who tries to capture Aang, but with the help of Uncle Iroh, he eventually develops conflicting feelings about the war and later becomes one of the primary protagonists. This change of heart causes the role of the primary antagonist to shift to Princess Azula, Zuko's sister. Although she is portrayed as a cunning and ruthless person, with the ability to manipulate others easily, she also is shown to be very insecure - a trait which would drive her to insanity after those she manipulated betrayed her.

Character designs were developed through a series of drawings by one of the series' creators, Bryan Konietzko. The main sketch depicted a middle-aged monk with an arrow on his head and later included a flying bison. His partner, Michael Dante DiMartino, was at the time interested in documentaries related to the South Pole. They combined these ideas and created the concept of an "air guy" and "water guys" trapped in a snowy wasteland, with "fire guys" invading them. Additionally, the writers based the characters' different bending abilities on individual styles of martial arts.

The characters of Avatar: The Last Airbender were designed by Michael Dante DiMartino and Bryan Konietzko, who are also the co-creators of the series. The anime-styled character art was inspired by Shinichiro Watanabe's Cowboy Bebop, Samurai Champloo, and FLCL (Fooly Cooly) of Gainax. Studios such as Studio 4°C, Production I.G, and Studio Ghibli, which produced anime-styled cartoons, were also sources of inspiration.

The greatest influences on the series were Asian art and history; the characters' various personalities and traits were based on philosophical teachings such as Taoism and Buddhism. In addition, the each character's bending element are based on the four classic elements of ancient philosophy: Water, Earth, Fire and Air. Each of these employ a different form of martial arts in their fighting choreography, such as Ba Gua for Airbending, Hung Gar for Earthbending, Northern Shaolin for Firebending, and Tai Chi for Waterbending. These individual styles of martial arts also reflect on the personalities of the user and the nations as a whole. For example, Ba Gua employs erratic circular movements and the use of centripetal force instead of brute strength to generate power; this reflects on Aang's bending styles and his tendency to be unpredictable and extremely carefree, as well as his pacifist nature.

Many of the recurring characters of the series have received more depth in their personalities, which are usually based their respective element. Aang, a pacifist monk, is also very carefree and child-like, which is commonly attributed to the "freedom" of the wind and the air. Toph, despite being blind, is extremely perceptive of the world around her due to her connection to the Earth. Unlike Aang, she is extremely brusque when criticizing others, which is attributed to Earth's tough and unbreakable nature. 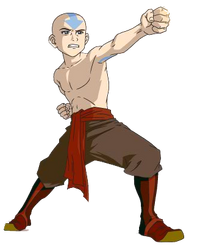 Aang (Zach Tyler Eisen) is the primary protagonist of the series. He is the current incarnation of the Avatar, the spirit of the planet manifested in human form. A reluctant hero, Aang often acts in a fun-loving, carefree manner. His pacifist and vegetarian nature demonstrates his love for life, a primary trait of Buddhism. The creators intended Aang to "defeat enemies with his wits" and be a "trickster hero". Though Aang generally acts in a playful, carefree manner, he becomes more serious during crisis and danger.

Aang is rescued from a century of suspended animation by Katara and Sokka. The three of them go on a quest to teach Aang the three elements he does not know: Water, Earth, and Fire. Aang eventually learns Waterbending at the North Pole, Earthbending from Toph, and Firebending from Zuko. He also helps various groups of people throughout the Four Nations. Aang ultimately defeats the Fire Lord at the end of the series, but does not take his life, further highlighting his opposition to violence. 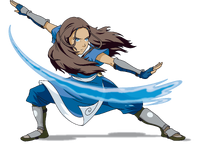 Katara (Mae Whitman) is the last remaining water-bender from the Southern Water Tribe, due to an invasion by the Southern Raiders and kidnapping of all water-benders in the tribe years previously. By the age of fifteen, she had mastered the art of water-bending, and thus began teaching Aang Waterbending simultaneously to his studies on earthbending. A "protective sister" for the group; Katara is still very stubborn and described as "a generic anime heroine" by SciFi.com. Katara is shown to be a very skilled Waterbender, one with the ability to cut through objects, to manipulate water whips, and the ability to bloodbend, which allows her to control the water in another's body. 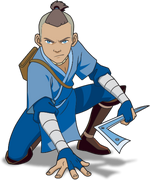 Sokka (Jack DeSena) is a 16 year old warrior from the Southern Water Tribe and Katara's brother. After rescuing Aang from the iceberg and learning of him being the Avatar, he along with Katara accompanies Aang on his quest to master the four elements and defeat the Fire Lord, ending the war and bringing peace to the world. Although he hails from a tribe of people with the ability to bend water, he was not given the gift and instead strives to become a worthy warrior and leader. Instead of bending, he is frequently given opportunities to use his ingenuity and weapons, including his boomerang, machete, and a space sword he forged from a meteorite. 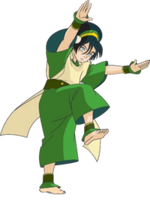 Toph (Jessie Flower) is a blind Earthbending master of the prestigious Bei Fong family in Gaoling. Her parents are overprotective and view her blindness as a disability. To avoid them, Toph learned Earthbending from Badgermoles and became a famous fighter for a time. She later fled her home to completely escape her family's control on her and to help Aang master Earthbending. Toph is fiercely independent, sarcastic, direct, brutally frank, and confrontational, commonly depicted as the choleric and tomboy of the group. Unlike other Earthbenders, her blindness produced a distinct style of earthbending that is not based on Hung Gar as is conventional, but rather the Southern Praying Mantis. This style places emphasis on short power and low kicks and complements Toph's build. Toph invented "Metalbending" while escaping from a metallic box. The technique requires intensive concentration on the earth and manipulating the impurities within the metal[1] 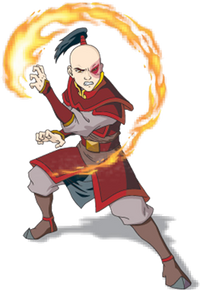 Prince Zuko (Dante Basco) was originally the primary antagonist of the series, but developed into an anti-hero and tragic hero and later, a protagonist. Zuko had been exiled prior to the beginning of the series by his father, and believed that capturing the Avatar was the only way to regain his honor. Zuko's ancestry reflects his own conflicted nature; his paternal great-grandfather is Fire Lord Sozin, the one who started the war, while his maternal great-grandfather is Avatar Roku.

During his exile, Zuko stumbles upon the newly released Aang but fails to capture him. Later on, when Admiral Zhao successfully captures Aang, Zuko releases him thus resulting in his new turncoat status. As a result, he and his mentor, Iroh, flee into the Earth Kingdom, where Zuko bonds with the people his nation terrorized. After being tempted by Azula's offer of honor-restoration, he betrays his uncle. After much internal struggle and turmoil, Zuko rejects the Fire Nation and seeks his uncle's forgiveness. He then joins the Avatar's group to become Aang's friend and Firebending teacher. During the series finale, Zuko is crowned Fire Lord and ends the war. Originally only a semi-competent Firebender, he becomes far more proficient as the series progresses, eventually reaching a master Firebender's level of skill. 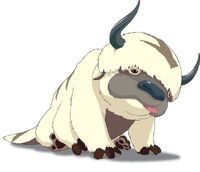 Appa (Dee Bradley Baker) is Aang's sky bison who serves as the group's main form of transportation around the world. He was stuck in suspended animation with Aang for 100 years, and shares a very strong bond with him. He possesses the ability to fly and can use his tail to create powerful gusts of air. Aang said that the flying bison were the first Airbenders.

The characters of Avatar: The Last Airbender received both praise and criticism from reviewers. Troy Island Mell, of IGN, felt that the story "would [not] be anywhere near as good as it is without its ability to create such strong characters". In particular, Mell enjoyed the development of Katara and Zuko throughout the first season, but thought that Zuko's relationship with his uncle was not "very organic." Jamie S. Rich of DVDTalk generally agreed with Mell's assessment of the characters. Rich also noted that unlike many television series, and praised the fact that Avatar introduces antagonists that have a deep backstory and "are [not] just evil for the sake of it".

Jeremy Mullin, another IGN reviewer, disagreed with Mell and Rich; he felt that the characters were not brilliantly done, though he noted that they introduced some drama and romantic tension usually not found on Nickelodeon, especially between Aang and Katara. Fritzhome and DVD Verdict also enjoyed the romantic tension, focusing mainly on the female cast: Katara, Toph, and Azula, as well as the two minor characters, Mai and Ty Lee. Fritzhome lauded the decision to not make the characters the "usual weak female characters" but to instead give them "strong opinions and strength". IGN also compared the character relationships, complimenting "Sokka and Princess Yue's forbidden love" and criticized Iroh and Zuko's relationship as not being executed properly. DVDVerdict felt that some minor characters, especially Mai and Ty Lee, were "love em' or hate em'" characters. Powers of DVDActive thought that while the characters fit into neat "archetypes", it was not a bad thing and fit well with the series.

Retrieved from "https://nickelodeon.fandom.com/wiki/List_of_Avatar:_The_Last_Airbender_characters?oldid=73006"
Community content is available under CC-BY-SA unless otherwise noted.