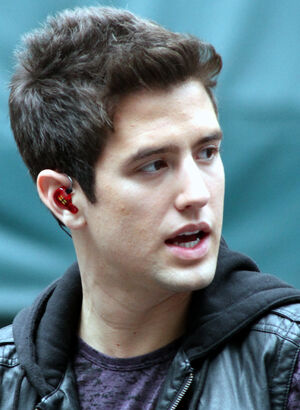 He is best known for his starring role as Logan Mitchell on the Nickelodeon series, Big Time Rush, as well as being a member of the Big Time Rush band itself.

Henderson was born and raised in Texas. He had a small role as a bully on the television program Friday Night Lights before moving to California at the age of 18, to pursue his acting career. Henderson's breakthrough role was Big Time Rush. He plays Logan Mitchell, the person who is always getting the group out of trouble. Henderson and the rest of Big Time Rush made an appearance at the 2010 and 2012 Kids' Choice Awards and performed at the 2011 Kids' Choice Awards. He also appeared in an episode of BrainSurge during the week of April 18–22, 2011. Henderson and Big Time Rush made a guest appearance on Figure It Out sometime in June 2012.

Retrieved from "https://nickelodeon.fandom.com/wiki/Logan_Henderson?oldid=72418"
Community content is available under CC-BY-SA unless otherwise noted.