Nickelodeon
Register
Don't have an account?
Sign In
Advertisement
in: The Loud House characters, Humans, Teenagers,
and 18 more
English

Luan Loud
The Loud House and The Casagrandes character

Slender, light brown hair styled in a ponytail with a yellow scrunchie, buck teeth with braces, a gag flower that sprays water on her white shirt and brown shoes, a yellow skirt, and yellow socks.

Gary the rabbit; Charles the dog; Cliff the cat; Geo the hamster; Walt the canary

"I know why the lights went out! 'Cause they liked each other! Hahahahaha! Get it?"

Luan Loud is one of Lincoln's ten sisters and the main characters in The Loud House. She is the fourth-oldest of the Loud children, at 14 years old in seasons 1 through 4, and 15 years old in season 5 onwards. She is an optimistic, fun-loving girl with a fondness for comedy and almost always delivers a pun whenever she speaks, which she often follows up with a hearty chuckle and saying "Get it?" (much to her siblings' annoyance). She also loves pulling pranks on her siblings, though her pranks become downright sadistic on April Fool's Day. She wears braces, has squirt-flowers on her shirt and shoes, and owns a ventriloquist dummy named Mr. Coconuts.

Luan started comedy at a very young age. Her first performances were for the Loud Family's pets. Her first public comedic act was at an open mic in the Royal Woods Bowling Alley. There, she did not perform well and was heckled by the audience. Knowing she had more to know about comedy, she enrolled in a clowning academy and graduated. After paying her dues, she started her own business, Funny Business, Inc.

Luan is a very goofy and fun-loving girl with an enthusiasm for comedy and making puns. Her goal is to make the world laugh along with her, though some of her material still needs work. She loves pulling pranks on her siblings, and frequently makes puns for every situation, though she gets on everyone's nerves because of it. While Luan laughs at others' humiliations and often comes off as a nuisance to others, she does it with good intentions and does not mean to harm anyone, as she just wants to make people laugh.

She has a taste for everything that is related to comedy - this includes comedy movies and TV series, clowns, pranks, stand-up comedy, and funny internet videos. Her most common pranking methods are dodging people in the face with pies and placing a whoopee cushion on others' seats. She also likes to record people experiencing funny situations with her video camera, but Luan is a strict ethicist when she does this, as she asks permission to the person she recorded to allow her to upload the video to the Internet. Unlike Lincoln, Luan already knows that she cannot upload videos without her subject's permission. 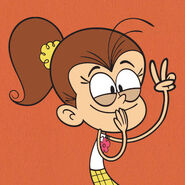 Luan as the Joker 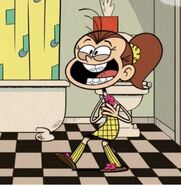 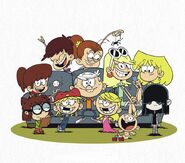 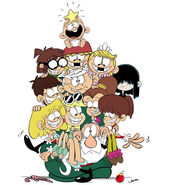 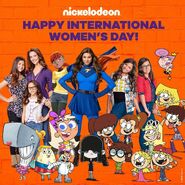 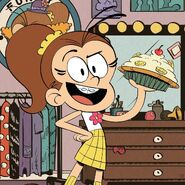 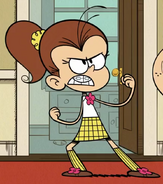 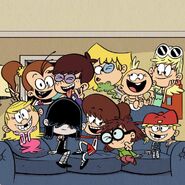 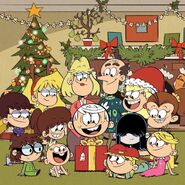 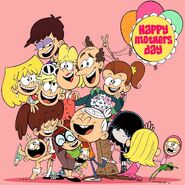 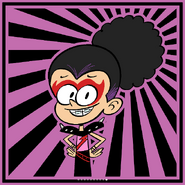 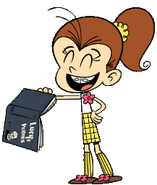 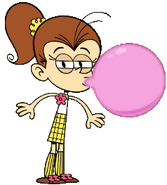 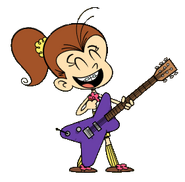 Luan and her dog Charles fighting over Mr. Coconuts