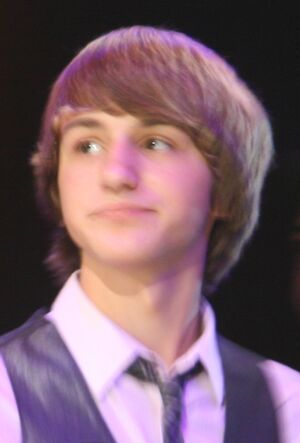 Lucas Cruikshank (born August 29, 1993) is an American comedic actor. Living in Columbus, Nebraska, he created the character Fred Figglehorn for his channel, named "Fred", on the video-sharing website YouTube. These videos are centered on Figglehorn, a fictional 6-year-old who has a dysfunctional home life and "anger management issues".

He appeared as himself in the iCarly episode "iMeet Fred", where he shuts down production of his webshow as a publicity stunt to benefit both shows. He then films a webisode of his show, thus appearing as Figglehorn with Carly Shay, Freddie Benson, Sam Puckett, and Spencer Shay that is seen at the end of the episode.

In September 2010, he starred in Fred: The Movie, produced by Nickelodeon. The network has subsequently created a franchise surrounding the character and a sequel began production March 2011. The film, Fred 2: Night of The Living Fred, premiered October 22, 2011. When the film premiered to high ratings, a third film was greenlighted as well as a television series, titled Fred: The Show, slated to premiere on February 20, 2012.[1] At the same time the show was confirmed in January 2012, another program starring Cruikshank, Marvin Marvin, was announced.

In 2011, he also guest-starred as Spencer, better known as the vigilante Kickbutt in the Supah Ninjas episode of the same name.

Retrieved from "https://nickelodeon.fandom.com/wiki/Lucas_Cruikshank?oldid=222168"
Community content is available under CC-BY-SA unless otherwise noted.