Nickelodeon
Register
Don't have an account?
Sign In
Advertisement
in: The Legend of Korra characters, Males, Teenagers,
and 5 more

Mako
The Legend of Korra character

"A Leaf in the Wind"

Mako is a firebender from a multicultural family who grew up on the streets of Republic City as an orphan with his younger brother, Bolin. Mako always wore his signature red scarf that was once his father's, who was murdered along with his mother when he was a boy. He formed a pro-bending team with his brother and Hasook and aspired for his new career to bring him fame and fortune. His aspirations changed, however, when he met the Avatar, Korra, who joined the team to replace Hasook and became a loyal friend. Mako, with the help of his teammates, was able to lead the team to second place in the championship. After the tournament's conclusion, Mako joined Korra in her efforts to stop the Equalists.

In the following months, Mako joined the Republic City Police Force, where he steadily rose up from being a beat cop to a detective. He joined his friends in an effort to stop Unalaq and Vaatu from merging. A few weeks after Harmonic Convergence, he rejoined Team Avatar in their search for new airbenders. However, they stopped when the Red Lotus attempted to kidnap Korra in Zaofu, instead working to bring down the anarchist organization.

After taking down the Red Lotus, Mako returned to his work as a police officer and was later appointed as Prince Wu's bodyguard, a position he continued in after the latter's coronation as Earth King.

Characterized by his stoic and brooding personality, Mako is generally aloof and indifferent, though he is not incapable of genuine kindness and a protective demeanor. He tends to act in a critical and controlling manner, stemming from a life on the streets and a drive to protect his little brother, which forced him to take on adult responsibilities at a young age. In light of the brothers' pasts, he cares deeply for Bolin and is very protective of him. After Mako lost his parents, he was willing to do whatever was necessary to help him and his brother survive the rough environment of Republic City, even going as far as scamming and working for a notorious criminal organization. Eventually, Mako abandoned these immoral activities, but refused to admit the criminality of his past actions to Korra, as he firmly believed he was doing what was necessary to survive. Mako always puts the interests of safety and survival ahead of other things, as exemplified by his reluctance to let Bolin keep a fire ferret as a pet, since that would strain their already small food supply. Living on the streets has given him a "hard-edge", though he seems to relax when he is with Bolin, Korra, or Asami, or when he achieves something important. For instance, when Butakha gave him the winnings from their last match, Mako grinned widely. Going with his hard edge, Mako has a wrathful side to him as well, having the capacity to kill or harm anyone who wrongs his brother and friends. This was particularly evident when he threatened an Equalist by raising a flaming fist when seeking information regarding Korra's whereabouts. His protective attitude toward his younger brother on the street in the years after their parents' death reflected this side of him as well.

Mako is very dutiful in his job as a cop, having arrested several triad members since joining the force, and was on the fast track to becoming detective.Despite his coworkers' constant belittlement, Mako promptly suggests his theories on open cases, and refuses to take the easy way out to close a case, being adamant in following leads. His commitment and effectiveness on the streets was such that he earned himself praise from President Raiko. His sense of duty also caused him to divulge information that would strain his relationship with Korra, ultimately ending it.

Mako has demonstrated considerable skill in the art of firebending, implementing a modern style of fighting that he developed in his pro-bending days. Critics of the sport note his use of a distinct "cool under fire" technique, which primarily involves a series of defensive weaving and dodging patterns quickly followed by successive spurts of offense, rendering Mako capable of defeating an entire pro-bending team by himself. Outside of pro-bending, Mako demonstrated great skill in traditional firebending combat. He can maintain his fire streams for a period of time for feats such as propelling himself through the air. He can also perform more advanced techniques such as the breath of fire. The raw strength of his firebending is also considerable, able to offset a large and point-blank explosion unharmed. His control is also very fine, as he is able to form a sleek dagger for intimidation and the likes.

Mako is skilled enough to generate lightning and redirect it, having learned the skills from his former boss, Lightning Bolt Zolt.[1] He is able to generate it from either hand quickly with little charging time and no arm movement and is also capable of maintaining the bolt for several seconds. He has used lightning for a job at a power plant in Republic City and can effectively use it in combat. He can also fire it with considerable aim, being able to hit speeding targets and controlling the charge of it to merely stun targets. While fighting several Equalist mecha tanks, Mako redirected the electricity channeled through their metal cables to disable them. When restrained by Amon's bloodbending, he was able to maintain enough focus and calmness of mind to generate lightning and score a direct hit against the Equalist leader. Amon admitted to Mako that he was impressed with his firebending skill, and that it was almost a shame that he would have to remove the bending of "someone so talented". When he was cornered by Ming-Hua's tendril attacks, he had the clarity of mind to aim lightning at her water tendrils, thus electrocuting her.

Mako has noticeable close-range and bare-handed combat skills, able to expertly perform a shoulder-throw. He has also displayed considerable agility, capable of both jumping long distances and performing flips, proving himself difficult to hit at a distance. He has considerable raw strength, as he could effortlessly launch an Equalist agent a great distance, casually carry Bolin over his shoulder or Korra in his arms, and hoist an Equalist into the air with one hand. While under the control of Amon's bloodbending, Mako was able to move his body slightly better than others caught under this technique and managed to aim a bolt of lightning at Amon, something that took the masked man by surprise. Mako is also shown to be quite level-headed in dire situations, and has quick thinking, which was exhibited when he came up with a plan to save his brother from the Equalists during Amon's revelation.

Mako is also good at reading maps, as he figured out where the Equalist rally was located by looking at the maps he and Korra obtained from the Equalist protester. Mako demonstrated this ability again when he discovered where the Equalist airfield was hidden. He also appears to be an adequate cook, preparing meals for himself and Bolin.

As a police officer, Mako uses a motorcycle as his vehicle of choice, displaying great skill with maneuvering it over slick terrain and even incorporating his firebending as a booster to extend the distance of his jumps and to stabilize after a near crash. He is also capable of piloting an airship, though is still an amateur at landing the vehicle. 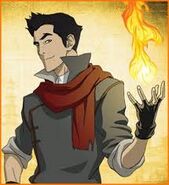 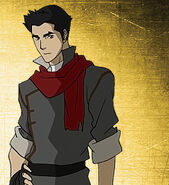