Nickelodeon
Register
Don't have an account?
Sign In
Advertisement
in: Dora the Explorer characters, Characters, Males,
and 6 more

Map is another main character who appears in Dora the Explorer. He is Dora's special helper and is there to help Dora and Boots figure out how to get to their main place. Map is on every episode on the show. He knows exactly where everything is.

Map is on every episode on the show. He knows exactly where everything is. His name and contribution to the Dora saga are widely disputed as if Dora has a map knowing where everything, some argue that it may be contradictory to her supposed occupation: "explorer". Others counter by stating that many explorers use maps to confirm the content or precision of the map.

Map is yellowish-white with some light blue on his inside, has blue eyebrows and a red mouth. Map has two white eyes with black pupils. 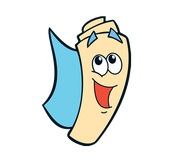