Nickelodeon
Register
Don't have an account?
Sign In
Advertisement
in: Character stubs, Aliens, The Fairly OddParents characters,
and 7 more

An alien with tentacles

"PUNY HUMANS! ...What's up?"
Mark Chang is a supporting character on The Fairly OddParents. He lives on a planet called Yugopotamia which no one on Earth knows exist except Timmy Turner and his fairies. He is the prince and son of the King and Queen of the planet. Like the rest of Yugopotamians, he is terrified of anything cute.

Mark is an alien Prince from the planet Yugopotamia, a place where everyone behaves and likes things opposite of humans. For instance, they find garbage and manure to be delicious and are terrified of cute things such as Poof or The Gigglepies. Mark's parents, King Gripullonand Queen Jipjorrulac, love their son very much, although they still arranged a marriage to the terrifying and beautiful (ugly to Mark) Princess Man-DIE. Eventually Mark fled to Earth where he uses his Fake-i-fier to remain disguised as a human boy. Unlike humans who find Vicky to be terrifying, Mark is greatly in love with Vicky.

Mark is a squid-like alien, possessing several tentacles and an exposed brain encased in a dome of glass. He is colored aqua green and wears a pink Fake-i-fier around his waist, allowing him to take the form of various Earth objects by spinning the yellow six-spoke symbol to the desired form. His species is generally warlike and loves painful or disgusting things, which explains why Mark fell in love with Vicky the instant he saw her, many of his appearances involving his attempts to woo her. He is one of the few people allowed to know about Timmy's fairy godparents since he's not human, therefore outside of Da Rules.

In his human form, Mark appears as a boy around Timmy's age with red eyes, curly black hair, and a green hat and pink shirt with the same symbol alien-Mark has on his Fake-i-fier. If something nice happens to Mark, for instance getting kissed by a girl, his Fake-i-fier will malfunction and he will lose the ability to remain in human form.

In the episode, "King Chang", Mark changed his human disguise form to that of a hunky young teenager named Justin Jake Ashton so that way he can actually date Vicky on earth, who he is in love with. Unfortunately for him, his Fake-i-fier malfunctioned just before the date, and Vicky dumped him.

In Fairly OddPet, Vicky says she got in a fight with him and refers to him as her boyfriend, possibly indicating that they have reconciled since the Fake-i-fier incident, but are now in a rocky relationship.

Mark first met Timmy when he wished for an alien monster for him and his friends, Chester McBadbat and A.J., to play with. Wanda Fairywinkle-Cosma and Cosmo Cosma, not being very good at making up monsters, "borrowed" one from Yugopotamia, which happened to be Mark. Upon arriving, he threatened to suck out the trio's brains with bendy straws, but believing him to be an advanced toy, the threat wasn't taken seriously, much to his confusion. Soon afterward Vicky burst in, frightening the kids. Seeing she had so easily instilled fear into the three that he failed to even faze, he immediately fell in love with her.

Thinking he was a kid in a costume, Vicky dragged Mark downstairs, where she ordered him to make her a chocolate shake. This caused him to fall for her more, since chocolate is the deadliest substance to Yugopotamians. While fixing his crush her meal he was attacked by Chester and A.J., still thinking he was a toy. He captured them easily and was about to suck their brains out when Timmy came in, armed and ready to fight. Timmy lost as well, but before Mark could do anything King Gripullon and Queen Jipjorrulac came to the front door, disguised as humans, and forced their son back home.

After returning home Mark became depressed without Vicky. On his birthday he began grieving when Cosmo showed up, fulfilling Timmy's desire to get Vicky "a million million" miles from him. The green-haired fairy showed Mark a fake message from Vicky, begging him to come take her away. All too eager to comply, Mark left with Jeff and Eric to retrieve her.

Landing on Earth, they quickly tracked Vicky and sprayed her with sleeping gas, then convinced Mr. Turner that she was leaving for Europe. They then returned to their home planet, only to find Timmy waiting, demanding her back. Unwilling to relinquish his love, he challenged Timmy to "dijifat", which Timmy immediately accepted, thinking it was some flower skipping horror. It was actually Death Combat, which Mark chose to have in the Yugopotamian War Arena. Despite struggling against Cosmo and Wanda's magic, Mark eventually got the upper-hand and fired a large gun...and missed.

Timmy then got to choose the arena, to which he picked Flappy Bob's Happy Camp Learn-a-Torium. Overwhelmed by the sweetness and bright colors, he surrendered. Feeling sorry for him, Timmy spared his life, promised to give him Vicky when he turned sixteen, and gave him a Smack-a-Mole machine as a birthday gift. Mark vowed to return once he had mastered the machine. Mark was briefly brought to Earth by Timmy and Vicky's reset watches, but this event was quickly wiped out of the timeline.

The following Halloween, when the royal ship was near Earth, Mark noticed the planet was going to explode, and went down with Jeff and Eric in Candy Protection Suits. While they quickly found Vicky, Cosmo prevented him from leaving on Timmy's orders. When the then in place wish was reversed, Mark recognized Timmy and accused him of preparing for war (since so many Earthlings were gathering candy). Timmy went along with this, threatening Yugopotamia. Panicing, Mark and his friends beamed back up and launched the P-Bomb at Earth. This was exactly what Timmy wanted, as it was really a piñata full of candy. Mark was temporarily saddened by Vicky's supposed death...until it was revealed that they had her cloned. 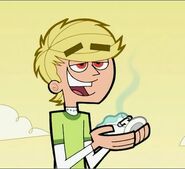 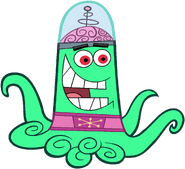 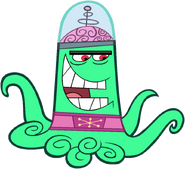