1964-present
Mary Jo Catlett (born September 2, 1938) is an American actress and comedian. She has been an actress since the 1960s, starring in the 1964 Broadway musical, Hello, Dolly! and television shows like Diff'rent Strokes, M*A*S*H, and General Hospital. On Nickelodeon, she is known for voicing Mrs. Puff on SpongeBob SquarePants since its debut in 1999. Catlett has reprised her role for all three SpongeBob films and many video games. 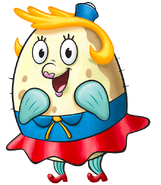