Max is one of the main characters from the Nick Jr. series, Max & Ruby. He is the younger brother of Ruby.

Max has appeared in every book and episode of Max And Ruby Adventures. He was initially a character in a series of books written by Rosemary Wells. His first appearance in television was in the pilot episode. Max's first appearance was in 1979 when the first Max And Ruby book, Max's First Word, was published. He has a red elephant and drives around a little red toy car. Originally, Max only spoke a few words each episode. Ruby trying to figure out what Max is saying was a running gag early on. In the sixth season, Max is old enough to go to preschool and changes his style from blue overalls to a white shirt with red strips and blue jeans. Max always spoke in one word, but in Season 6 he begins to speak in full sentences. He is shown to be very smart and is now able to read.

Max has white fur and black eyes with long gray whiskers. Originally he wears blue overalls often with a strap undone with a red and white striped shirt. Starting in Season 6, he wears his striped shirt with blue pants. 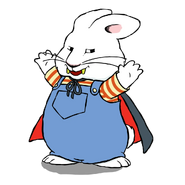