Mermaid Man and Barnacle Boy are an elderly superhero duo featured in SpongeBob SquarePants. They are the stars of a TV show that is watched by the series' protagonist. They both live at the Shady Shoals retirement home, having retired from their superhero business when they first appear, but SpongeBob and Patrick manage to convince them to return to being superheroes.

Mermaid Man forgets many things at times and he enjoys sleeping, watching TV and playing Bingo. He was voiced by the late Ernest Borgnine, though Joe Whyte and Joe Alaskey voiced him in the video games. His real name is Ernest "Ernie" Borgnine and he is 72 years old.

To enter the Mermalair, a secret switch must be pressed inside Shady Shoals rest home, and it will activate a secret door under the couch. A hole leads down to the lobby of the Mermalair. In SpongeBob SquarePants comics, it's accessible by charging full speed at a wall in the home.

At the end of the hole at the entrance, the lobby of the Mermalair is the first room. I contains various obstacles to get to the main chamber.

The Mermalair Main Chamber is found after the lobby, in which doorway leads to it. Inside, the Security Computer is present, in which it controls the security system. In addition, funnel machines and the tower of power control the power within the Mermalair. Finally, a leisure area, including a Television set, is where Mermaid Man and Barnacle Boy rest.

The Mermalair has a large security system in which Mermaid Man and Barnacle Boy use to keep the villains in the villain chamber locked up. In order to shut the whole system down, four buttons must be pressed, along with the main shut-down button, at the main computer.

The Mermalair is broken up into sections:

The Invisible Boatmobile is Mermaid Man and Barnacle Boy's vehicle, located in the Mermalair. The boat is a regular-sized boatmobile with many superhero features to it, such as the origami button, which can fold the boat into a visible origami shape. In one episode, SpongeBob claims to know lots about the boat, like knowing where the windshield wipers are, incorrectly pressing the aforementioned button. It is said for the boatmobile to have a more powerful engine than others to enable the heroes to get to the situation where their help is needed faster. In addition to the engine, the boatmobile has manual transmission.

Mermaid Man and Barnacle Boy have many enemies. 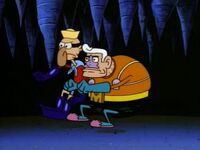 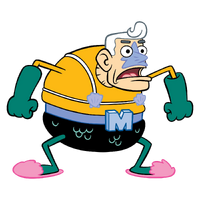 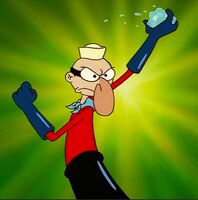 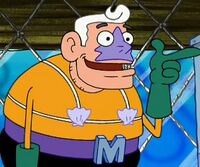